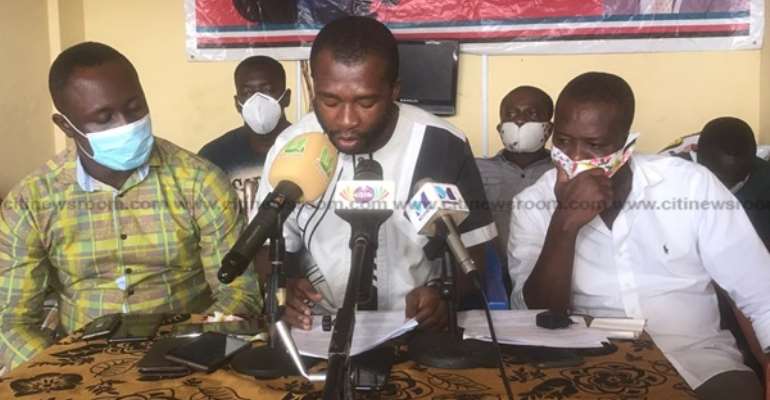 The opposition National Democratic Congress (NDC) in the Ellembele Constituency of the Western Region has chided President Akufo-Addo to apologize to the people of Nzema for lying about the construction of a One-District-One-Factory in the constituency.

This comes a day ahead of President Nana Akufo-Addo’s tour of the Region.

Raising their concerns at a press conference at Anyinase, the Communication Officer for the Constituency, Kwesi Hanson said the President lied about the construction of the Feanza Coconut Oil Industry.

He said the industry been in existence for more than 10 years.

“The people of Ellembelle District have been waiting for the fertilizer factory which Nana Addo promised them during his campaign tour in 2016 at Nkroful. For the past three to four years, this promise has not been fulfilled and the people of Ellembelle are so disappointed, feel cheated and deceived by the President and the NPP government.

“At the meet the Press encounter organized on Friday 13th December 2019, the President peddled highly mischievous falsehood when he indicated that a coconut oil processing factory has been established in Ellembelle and that over 1,600 jobs have been created for the people of Ellembelle. One would wonder if the private initiative of an individual can be classified as one of the flagship projects pencilled down for each of the District in the country.”

The Ellembele NDC thus asked the President to apologize or commission the Feanza Industrial Factory which is along the Esiama-Nkroful road if it is truly a 1D1F project.

“Is it not surprising and so interesting that the President did not include the commissioning of said established factory (Feanza Oil industrial) in his itinerary which is along the same road linking Esiama to Nkroful. We would like to bring to the attention of the president that if it is indeed the fact that the said factory is a 1D1F, he must commission it. In the wake of this development, we want the government to come again on the establishment of Coconut oil factory, published the names of the over 1,600 people he falsely claimed have been employed and the income taxes accrued as a result of the employment.

“We forcefully submit that the president, Nana Akufo Addo lied to the people of Ghana and as a matter of urgency should come out and render an unqualified apology to the people of Ellembelle and Nzemamaanle Traditional Council.”

He also questioned the unnecessary delays with the construction of roads to the home town of late Dr. Osagyefo Kwame Nkrumah.

“While the president has the discretion and prerogative to commission any completed government project, or cut the sod for the commencement of a new one, there are a few issues for which the people of the communities he is touring would want him to address including the uncompleted road linking Esiama to Nkroful.

“This was a project that was awarded on contract in 2016, under the NDC. At a stage in its construction, after the NDC lost power, the current administration ordered the contractor to evacuate from site. It is curious that the contract was re-awarded to the same contractor by this government, as the 2020 election drew closer. We would like the president to answer the following questions:

1. The road project has delayed for 4 years, after the NDC left office. Was the initial contract terminated? If yes! Why?

2. What is the reason for the needless delay? Is it for lack of funds for a the road? Or is it a deliberate attempt by the government to gain political advantage in an election year?

3. Who is paying for the contract? Is it the government or, as reports suggest, is it being funded by Ghana Gas Company?

4. So, if Ghana Gas Company is now the entity sponsoring the Esiama Nkroful road, rather than government, based on what moral principle did your government accept financial help from that company, given that, your Deputy Minister for Energy, Hon. Joseph Cudjoe (MP for Effia Constituency), recently said that an NPP government would never have sited that gas infrastructure facility on Nzema soil, if the NPP was the party in power at the time.”