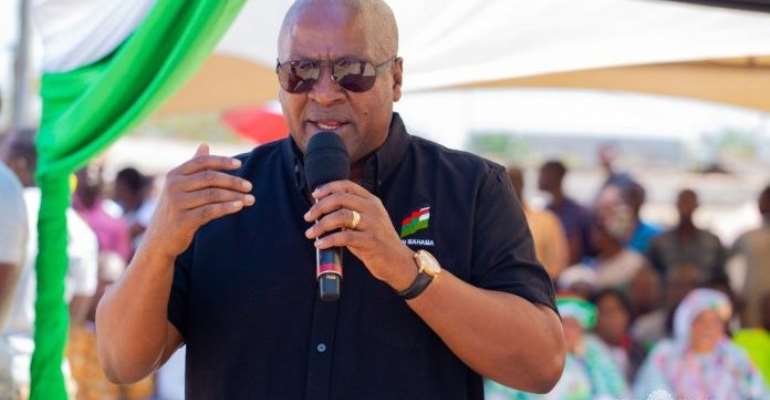 Former President John Mahama has charged supporters of the NDC in the Volta region to ensure that they protect ballot boxes at their polling stations in the December polls to prevent rigging.

According to Mr Mahama, happenings at the just ended voter registration exercise is an indication of the ruling NPP’s agenda to win the 2020 polls at all cost.

Mr Mahama made reference to the shooting incident involving Special Development Minister Hawa Koomson and the Ayawaso West Wougon election violence to back his claims.

“… You have the opportunity to change that and you can only change that if you’re able to vote, and so you must not allow anybody to disrupt that voting procedure in your polling station branch and make your vote not to count. And so, Let’s us all commit to peaceful elections and I know that if the elections are peaceful, free and fair, NDC would be victorious in the election.”

Mr. Mahama who was addressing residents of Mepe in the North Tongu constituency is on a four-day campaign tour of the Volta in his bid for a comeback as President of the country.

Touching on some policies of the NDC, Mr Mahama noted that his government if voted again, would embark on massive job creation for the teeming Ghanaian youth.

He further stated that “We have several programs, when we launch our manifesto we would give you more details but there are many things in there that would ensure that our young people get jobs to do because today, it’s about jobs; what is the use of going to school and when our children complete the university and become graduates they can’t find jobs; and so, every program that we are going to do must relate to creating jobs.”

While in the region, the NDC flagbearer would be meeting and addressing youth groups, market women, chiefs and other interest groups on his party’s programs and policies ahead of the December polls.

Furnish us with Ejura committee’s report – Families of kille...
23 minutes ago