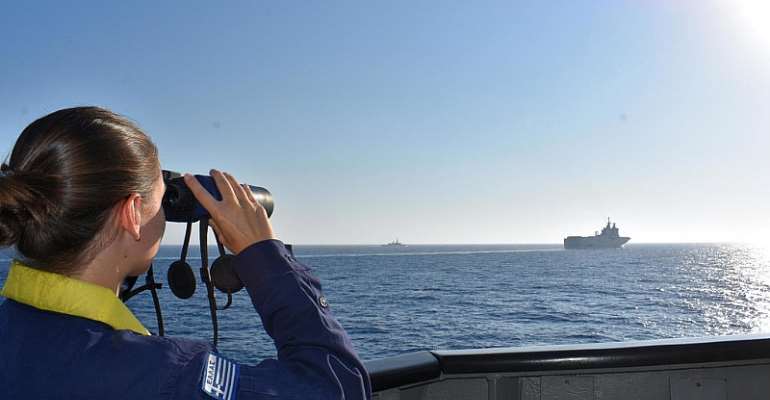 © Greek Ministry of Defence/Handout via REUTERS

Turkey has vowed to send drilling ships to the southwestern coast of Cyprus to explore for oil and gas in an area claimed by Greece. Ankara has rejected criticism from the European Union, France and the United States of its exploration, saying it will not be cowed by threats.

The Turkish drill ship Yavuz is expected to drop anchor on Tuesday to the south-west of Cyprus and will explore the coast of the island for around a month.

The Yavuz vessel joins another Turkish ship -- the Oruc Reis -- which last Monday kicked off a two-week drilling survey in disputed Eastern Mediterranean waters close to Cyprus and the Greek island of Crete.

The move sparked alarm in Greece, which deployed its own naval vessels to the area.

Turkey's claims to the waters, which it says are on its continental shelf, have repeatedly been dismissed as illegal by Athens and the European Union.

Brussels on Friday called on Ankara to halt energy exploration off Cyprus, arguing that the drilling infringes on the country's exclusive economic zone.

“This action...undermines efforts to resume dialogue and negotiations, and to pursue immediate de-escalation, which is the only path towards stability and lasting solutions, as reiterated by EU foreign ministers,” he said, following an emergency meeting.

The United States has also urged Turkey to turn back, insisting there was an "urgent need to reduce tensions".

Tensions in the region have simmered between Nato allies Greece and Turkey in recent months over overlapping claims to hydrocarbon resources in Mediterranean waters.

France announced last week it would bolster its presence in the region in support of Athens.

Turkey on Saturday accused Paris of interference and rejected claims that its energy exploration in the Eastern Mediterranean encroaches on Greek territory.

"We will not back down in the face of sanctions and threats," said Turkey's President Recep Tayyip Erdogan, speaking in the northeastern city of Rize.

While he pledged that Ankara was ready for dialogue, he insisted: "We will never bow to banditry on our continental shelf."

Since gas reserves were discovered within Cypriot maritime borders in 2011, Ankara has maintained energy profits should be shared.

Cyprus has been divided since 1974, between the Republic of Cyprus, in the island's south, controlled by Greece, and the Turkish Republic of Northern Cyprus, a breakaway nation recognised solely by Ankara.

Greece claims that islands must also be taken into account in delimiting a country's continental shelf, in line with the UN Law of the Sea, giving it the sole right to Cyprus regardless of the island's proximity to Turkey.

The two countries have come to the brink of war in the past and the new race to develop energy resources in the East Mediterranean has exacerbated rivalries.

Earlier this month, Greece, Cyprus, and Israel signed a deal to construct a pipeline to ship gas to Europe, which Turkey said left it out.

German-led mediation efforts with Greece were called off and Ankara resumed its oil and gas exploration in increasingly troubled waters.

Nurses, teacher trainees who completed their training in 201...
21 seconds ago