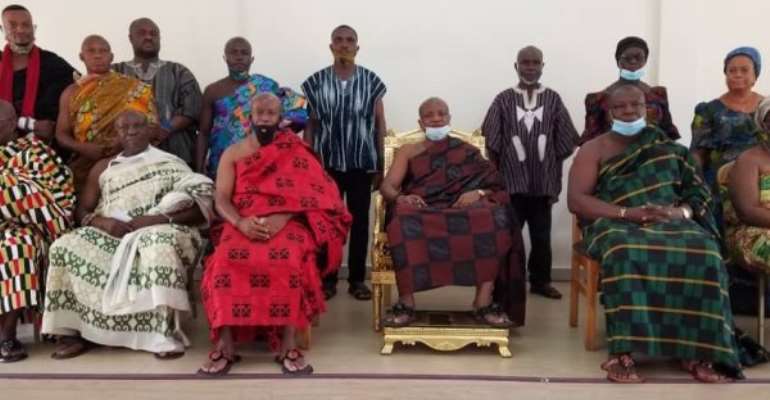 Togbe Afede XIV, Agbogbomefia of Asogli State has assured the people of Banda Bongase in the Bono Region of efforts to sustain the peace and security in the area.

He said the Volta Regional House of Chiefs shared their plight and would advocate for justice and asked the people there to support peace efforts by exercising calm and restraint.

Togbe Afede gave the assurance, when Togbe Sena Nyagble I, Chief of Bongase Tornu Lapla in Bono Region paid a courtesy call on him on alleged recent incidents of violence in the community during the voter's registration exercise.

“We sympathise with you and we will not forget to fight on your behalf Its important that when you go back, you and your colleagues must exercise as much restraint as possible so you can continue to contribute to the maintenance of peace in your area and also in the country at large.”

Togbe Afede said reports from Banda among others, prompted the Volta Regional House of Chief's to tour of some border communities, in an effort to ascertain some of the allegations, and if anything, spur stakeholders to act against the alleged acts of intimidation and violence.

The Paramount Chief who is also the President of the National House of Chiefs, said stakeholders must ensure that persons unable to register as a result of border closure and violence were given back their voting rights.

He said the results from the recent voter's registration exercise negated the “long standing” claim that the Volta Region supported voter fraud, and appealed to natives to maintain their dignity, and not betray each other for political gains.

Togbe Nyagble said there was “no reason” for the May 2020 burning of the Lapla community, and also said residents could not register due to violent attacks.

The GNA facts checked however indicates that the Voters registration exercise begun on the 30 June 2020 before the alleged burnings in the community.

Tobgui Amenya Fiti, Paramount Chief of Aflao Traditional Area allegef that such incidents must be condemned, and also said that President Nana Akufo Addo had promised to set up a committee to look into the allegations, and that the chiefs were in support of the gesture.