Can Cocoa be worth more for West-African Economies? 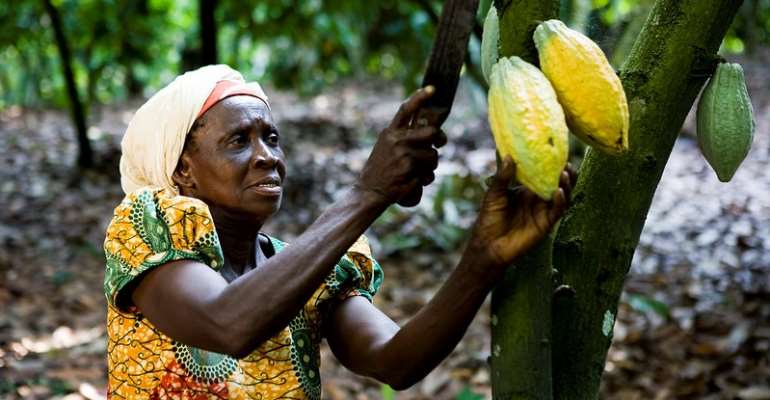 Cocoa is believed to have originated from Central America about 5000 years ago, as it was a delicacy of the inhabitants along the Yucatán but today, the production of the cash crop has gained global recognition. With three main varieties, Forastero, Trinitario and Criollo – the Forastero is the most widely produced cocoa variety, making about 90% of the cocoa produced worldwide. Criollo is considered a delicacy but as compared to the Forastero, it has a low resistance to diseases and a lower yield. The Trinitario is a hybrid of Criollo and Forastero - this variety is disease resistant and has a higher yield as compared to the Forastero. According to the Food and Agriculture Organization Corporate Statistical Database (FAOSTAT) of the United Nations in 2017, Ivory Coast was the largest producer of cocoa with 2,034,000 tonnes, representing 38% – Ghana was second with 883,652 tonnes, representing 17%. Nigeria and Cameroon placed 4th and 5th, producing 328,263 tonnes and 295,028 tonnes respectively.

The economies of these African countries have benefited immensely from the production and exportation of cocoa. In 2017, Ivory Coast recorded a trade surplus of $1.96 billion after exporting $10.3 billion and importing $8.37 billion worth of goods. With a population of 24.29 million in 2017 according to the World Bank, agriculture and its related activities has been the primary occupation of two-thirds of the population. The Gross Domestic Product (GDP) of Cote d’Ivoire in 2017 was $37.4 billion – cocoa bean was the top export, generating $3.79 billion, rubber, cocoa paste and cocoa butter generated $1.1 billion, $1.04 billion and $624 million respectively.

The economic narrative for Ghana in the last decade also relays economic thrives – the economy of Ghana has averaged a growth rate of 6.68% from 2000 to 2018 with 25% being the all time high recorded in the first quarter of 2012 and -1.6% being the lowest recorded in the third quarter of 2015. In 2017, Ghana exported $17.1 billion worth of goods and conversely imported $13.2 billion, recording a balance of trade of $3.9 billion and a GDP of $59 billion. Cocoa beans and cocoa paste ranks 3rd and 4th on the 2017 list of top exports of Ghana- contributing $1.77 billion and $538 million respectively. With a population of 28.83 million in 2017, about 52% of Ghana’s labour force was engaged in Agriculture. The cocoa sector accounts for about 800,000 jobs across six regions in Ghana.

The chart displays the annual average price of cocoa per kilogram from 2009-2019. In recent times the commodity market has been bearish for cocoa, especially through 2017 when the price of the cash crop only increased once in the last quarter but the price fell once more to end the year with $1,917.68 per tonne. More than two-thirds of the price of cocoa has been wiped off following a sharp decline in the price of cocoa which began in 2016. The price of a tonne of cocoa has decreased from $3,000 to a little over $1,900 in a space of two years even though there has been a significant rise in the production of the cash crop within this duration. This development has affected the economic activities of cocoa farmers as their income has decreased by 30-40 percent as recorded by the Cocoa barometer in 2018.

In 2015, the commodity market for cocoa was bullish as reported by the International Cocoa Organization (ICCO) – the increasing demand from the new markets specifically China and India resulted in the boom that motivated the cocoa farmers to produce a surplus of 400,000 tonnes against the annual 4 million tonnes supply. The cocoa farmers had overproduced out of the expectation from the bullish market for the cash crop at the time. In the first quarter of 2018, the President of Ghana and the President of Cote d’Ivoire signed the ‘‘Abidjan Declaration’’- an agreement that reaffirms the commitment of the two largest cocoa producing and exporting countries to address the challenges plaguing the cocoa sector of both countries.

In June, 2019, representatives from Ghana, Cote d’Ivoire together with other participants in the cocoa industry met to work out new modalities against the ‘‘Take it or Leave it’’ modus operandi for pricing cocoa on the global market. The inclusion of Nigeria and Cameroon in the current arrangement could have resulted in a solid resolve to the deteriorating situation in the cocoa industry as these countries are ranked in the top five cocoa producing countries in the world. Cocoa was Nigeria’s 4th top export generating $660 million and a GDP of $375 billion in 2017- Nigeria is Africa’s largest consumer market, controlling about 15% of the overall growth by 2025 as reported by McKinsey Global Institute (MGI), the business and research arm of McKinsey. Cocoa is the 3rd top export of Cameroon, generating revenue of $492 million to a GDP of $34.9 billion in 2017. Cameroon and Nigeria are also experiencing the negative impact of the huge drop in the prices of cocoa in the global market.

In 2016, the Fortune Magazine published a study that showed that about 2.1 million children in the cocoa producing countries in West-Africa are engaged in harvesting cocoa - Government agencies have paid lip service when it comes to eradicating child labour in Africa. In April 2018, the cocoa barometer published a report about the $100 billion cocoa industry – the cocoa barometer declared this about child labour "Not a single company or government is anywhere near reaching the sector-wide objective of the elimination of child labour, and not even near their commitments of a 70% reduction of child labour by 2020".

Another prevailing challenge for the cocoa sector in Africa is the lack of adequate processing plants that could convert the raw cocoa beans into world-class finished products. For many decades, cocoa has been exported from Africa in its raw form. On the other hand, Europe is a well known destination for the consumption of cocoa products – the European market accounts for about 50% of the global retail sales of chocolate. In 2017, the European cocoa-processing industry experienced an increase of 1.3 million tonnes, representing 2.6% and exporting $20.6 billion of chocolate products – the market accounted for about 74% of the global sales for chocolate as published by the CBI- Centre for the Promotion of Imports from developing countries. During this period, cocoa producing countries in Africa were experiencing the negative impact of the huge drop of the price of cocoa on the commodity market on their economies as a result of a surplus on the market - a clear indication that cocoa producing countries in Africa should rather invest in processing cocoa into finished goods if they are to make the most out of the cash crop.

Alexander Ayertey Odonkor is a chartered financial analyst and a chartered economist specialized in the economic landscape of developing economies. Alexander holds a master’s degree in finance and a bachelor’s degree in economics and finance.

Emmanuel Amoah-Darkwah is a chartered economist with specialization in economic policy analysis and an ambassador for the United Nations' Sustainable Development Goals. Emmanuel’s work has been covered by the BBC, Bloomberg, CGTN, CNBC Africa and other major domestic news outlays in Africa.

Tunisians in largest rally against president's 'coup'
10 minutes ago