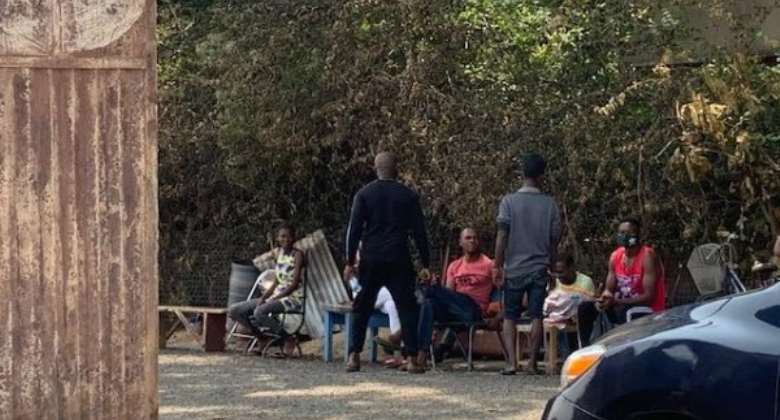 More than 500 victims of the “Kiosks Estate” fire incident at Shiashie, an Accra suburb, have appealed to the general public for material and food support.

“We have lost everything. Not even a pin. As I sit now talking to you, I am not wearing an underwear or brassier. This is a painful situation and we need help,” Zavi, a victim said along with tears.

The middle-aged woman who sells flip-flops, popularly known as (charley wote) said the COVID-19 pandemic restrictions negatively affected their business and that the fire occurred at the time business was about to flourish.

“The fire took us by surprise and when it got to our kiosk my grandchildren and I were nearly trapped in it. The thought of and time to salvage our items did not even occur,” she said.

Ms Veronica Asabil, another victim, told the Ghana News Agency (GNA) that she was helping her four-year-old son to sleep when she was hit by the smoke and then, the fire.

“Quickly I had to pick my son out to save him from the fire that followed. At least I had a bag with some belongings when I came to Accra to hustle but now I am left with nothing, with no relative here to fall on in this critical moment,” she added.

Ms Asabil said, they stood out helpless as the fire consumed their belonging to ashes and said, though Madam Lydia Seyram Alhassan, the Member of Parliament for Ayawaso West Wuogon Constituency gave them some items, they needed food and money for transport home.

Aminu Issah, a Gardener and a father of two, said his television set, money and other personal effects were burnt to ashes.

The victims welcomed the Disaster Recovery Fund for victims set up by the MP but prayed for some help now to “to start life over again.”

The MP also provided mattresses, 500 bags of rice, and buckets to the victims and secured the Shiashie Presbyterian Church as shelter for them.

Madam Alhassan also donated some money to them and appealed to other residents to come to the aid of the victims.

The fire, said to have started around 0930 hours on Friday, levelled to the ground more than 50 wooden structures and shops, which served as homes to over 500 people.

There were no casualties.

On Sunday, when the GNA visited the area, it saw officials of the Statistical Service and the National Disaster Management Organization taking the bio-data of the victims.