By Neil Sands, with AFP Bureaus 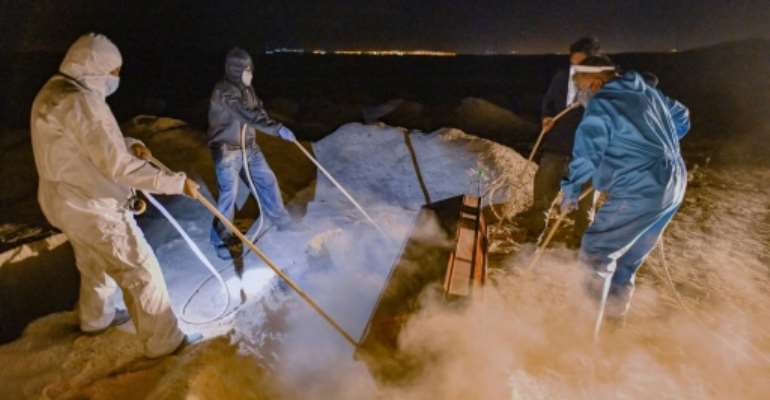 The coronavirus has killed more than 766,000 people around the world. By Diego Ramos (AFP)

With more than 21.5 million cases worldwide, a second wave of infections is also threatening further disruption in Europe where summer holiday-makers are helping fuel a resurgence of COVID-19.

The disease has killed more than 766,000 people globally, and the number of deaths hit 50,000 in India, which is still battling its first wave with 2.5 million infections -- the third-highest in the world.

The postponement of New Zealand's election to October 17 came after the shock discovery of COVID-19 in Auckland last week, ending the nation's 102-day streak without community transmission.

"This decision gives all parties time over the next nine weeks to campaign and the Electoral Commission enough time to ensure an election can go ahead," Ardern said.

She said the return of the virus -- which sent New Zealand's largest city into lockdown -- had rattled Kiwis and could have discouraged some from voting in a September election.

In South Korea, another country that had brought its initial outbreak largely under control, thousands of Protestant church members were asked to quarantine as authorities battled virus clusters linked to religious groups.

The largest of those current clusters is centred on the Sarang Jeil Church in Seoul, headed by controversial conservative pastor Jun Kwang-hun.

South Korean have authorities have filed two separate complaints against him for deliberately hindering efforts to contain the virus.

Across the Pacific, less than three months out from the American presidential election, the surging caseload in the United States -- the worst in the world at more than 5.4 million with 170,000 deaths -- has forced the convention season online.

The Democrats' disparate factions are projecting a united front behind Joe Biden as their four-day virtual gathering gets under way Monday, as they seek to oust President Donald Trump -- who has been widely criticised for his handling of the pandemic.

The Trump administration and Congress are under increasing pressure to ease the economic pain unleashed by the virus, with tens of millions left jobless and the global economy facing a historic downturn.

Many countries have plunged into recession since the coronavirus first emerged in China late last year.

The latest evidence of the economic destruction emerged in Japan, which saw its economy shrink a record 7.8 percent in the April-June quarter -- the worst contraction in the nation's modern history.

Italy -- once the global epicentre of the coronavirus -- has ordered the three-week closure of all dance venues after a pick-up in infections over the weekend blamed in part on young partygoers.

"The contagion is on the rise but we're dancing," proclaimed the Corriere Della Sera newspaper, which slammed Sardinia's clubs as being "joyful contagion machines".

But government attempts to curb the spread of the virus in parts of Spain and Brussels have been met by scepticism and protests.

"They are forcing us to use a mask, they want us to stay home practically locked up," said Pilar Martin, 58, at a rally in Madrid that drew a variety of people, many promoting widely debunked conspiracy theories about the coronavirus being a hoax.

That came after Britain removed France, the Netherlands, Malta and three other countries from its list of places exempt from self-isolation rules because of the continent's second virus wave.

Wary of a similar resurgence, authorities in Australia's most populous state of New South Wales have banned children from playing the recorder and singing in choirs to stem the spread of the virus after infections were detected at several Sydney schools.

Dancing is also off-limits as Australia battles to contain a number of outbreaks after months of near-zero local transmission.