13 Pass Out Under Lead & Enter initiative 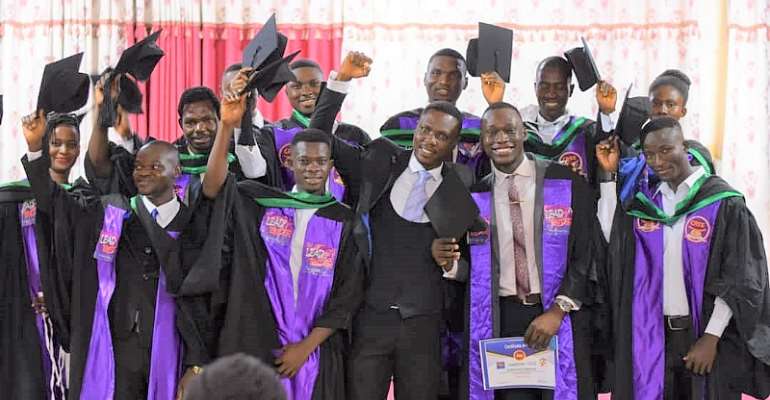 Thirteen graduands of Lead & Enter Ghana trained in leadership and entrepreneurship have successfully passed out at a colourful ceremony held at the Sunyani Technical University (STU).

Since 2017, Lead & Enter has been grooming students in tertiary institutions, especially students of STU in areas such as loyalty and leadership, confidence in leadership, leadership and followers, the power of prayer in leadership, starting my own business and identifying a market need.

Other areas covered during the training were passing your university exams, Networking, risk management, character in leadership, becoming an executive and pitching for a business investor, among others.

Addressing the graduation ceremony, the Dean of Students at STU, Mrs. Cynthia Gyamfi Adu-Gyamfi noted that the graduands have had several training sessions exposing them to different managerial concepts such as leadership, risk management and networking.

“I would like to say that these are intended to prepare you for the job market and also to apply those theories learnt to solve problems that may exist in organizations and industries”, she added.

She further asked them to strive to maintain and create new social connections after school, saying; “some people may recommend you to employers because of the social relationships they have with you. You are the future leaders of our country, I would impress on you to exhibit qualities of integrity and good judgement in all you do. The society will look up to you for specific tasks to be accomplished.”

Mrs. Adu-Gyamfi also urged them to add value to their lives after school and not relent in their efforts at pursuing further studies.

“In the near future, Turning lives foundation would be proud to have Presidents, Ministers, Politicians, Rev. Ministers, MPs, Directors and other public officers in responsible positions”, she stated.

The CEO of Turning Lives Foundation, Alexander Obeng Boateng said the main objective of Lead & Enter was to train tertiary students in leadership and entrepreneurship with the view to bridging the gap between theory and practice.

“We are creating a pool of God-fearing, potential, creative, loyal and innovative young leaders who will be instrumental in effective future leadership in our country and Africa as a whole”, Mr. Obeng Boateng said.