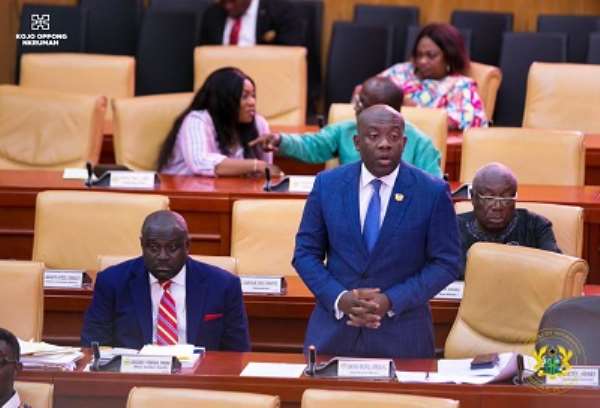 Information Minister Kojo Oppong Nkrumah who is also the Member of Parliament for Ofoase Ayirebi has said his use of the phrase ‘Papa no’ in Parliament on Friday, 14 August 2020, in reference to colleague MP John Jinapor on the Minority Caucus side during a debate on the floor, was in jest and not meant to be offensive.

“Mr Speaker, earlier, I was trying to catch your eye to request that the use of my expression which caused apprehension on the other side be expunged from the record.

"I didn’t mean it to offend anybody. It was in jest. And if anybody took offence to it, the records should reflect that it’s been expunged,” he said.

"I want to encourage ‘Papa no’ to take some time and follow the structure of this conversation and support,” the Ofoase Ayirebi MP told the House.

In response, a livid Minority Leader of Parliament, Mr Haruna Iddrisu, said: “You come to parliament to employ those words used on social media, we take strong objection to it.

"If you don’t withdraw, we won’t recognise you today as a minister. We will not. Do what you will do,” Haruna Iddrisu said.

“From today, we won’t recognise you as minister of this republic.

"And we will not accord you any respect as a minister. Let’s throw it to the dogs. What do you take us for? So, ‘Papa no’ accepted. But from today, we will not", he said.

‘Papa no’ has become the toast of social media after it was used in the raging digital war between singer Mzbel and actress Tracey Boakye in reference to a sugar daddy known to both of them.