Erquy: a day in the real-life Gaulish village of Astérix 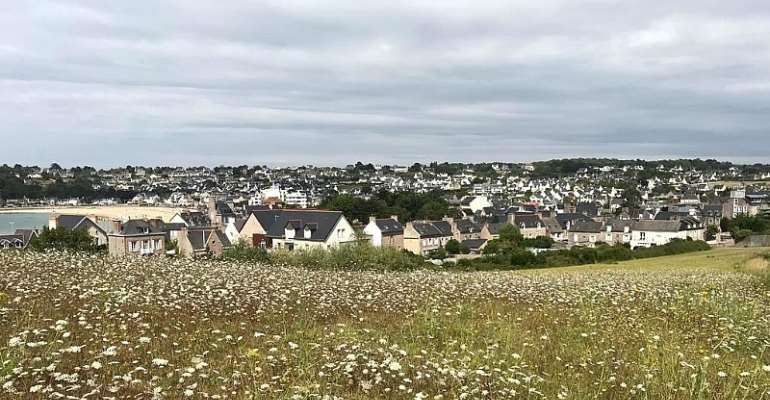 The town of Erquy in France's Brittany region is held by many Astérix aficionados to be the real-life inspiration behind the Gaulish village of the cult comic series. RFI visited to town on the northwest coast to find out why.

"The year is 50 BC, and all Gaul is occupied. All? One small village of indomitable Gauls still holds out against the invaders..."

When French writer Goscinny and cartoonist Uderzo created the Asétrix series, little did they know that their comic strip would become an international franchise translated into more than a hundred languages, with blockbuster films and a Disneyland-style theme park.

Following its début in 1959, many in France wondered: was the fictional village by the sea with its surrounding Roman camps based on a real place?

The region in Astérix's village is obvious for French readers.

Obelix's menhirs, the druid Getafix's potions and herb-gathering in the forest, boar-hunting, overseas invasions by pirates and Gothic warriors, all point to the ancient Celtic cultures of Brittany.

The region of Brittany, known as Armorica in Roman times, was inhabited by Gallic tribes who were mainly hunter-gatherers. Armorica was integrated to the Roman Republic in 51 BC.

The Astérix series is set a year later, in 50 BC. It is no secret then that the famous Gaulish village by the sea, eternally holding out against the Roman conquest, is in coastal Brittany.

Many consider the coastal village of Erquy in Brittany to be the birthplace of Astérix, the famous Gaulish warrior.

In an interview with AFP in the 1990's, Astérix's cartoonist Uderzo suggested that the village of Erquy in Brittany may have influenced him.

He admitted to visiting Erquy as a child regularly with his brother, when his family sought refuge in a nearby village during the Second World War.

"I did not consciously choose Erquy," Uderzo said in the interview. "But there are strange and troubling coincidences."

Astérix-lovers and specialists point out various similarities between the Gaulish village and Erquy.

Many cite ancient history. In the Iron Age, they say, Erquy was a Gaulish village with a Roman camp on the outskirts.

Others point out Erquy's three prominent marine rock formations. They claim that these are the three rocks that are seen on the map of Astérix's village that precedes every edition.

Erquy's port, beaches and Gallo-Roman vestiges are also claimed as evidence of the origins of Astérix's village.

Faced with hasty comparisons made by Astérix aficionados, Uderzo maintained that the aim of Astérix's creators was not to replicate an existing village, but to draw inspiration from coastal villages in Brittany in general.

"Yes it's Erquy, so as not to disappoint those who believe it," Uderzo says in the video report below (in French) at 02:45. "But we're not going to officially confirm that."

Astérix's creators drew the line when the local tourism industry got a bit too enthusiastic.

"There were postal seals selling Erquy as Astérix's village... We had to reluctantly intervene," Uderzo said. "Reality cannot ever replace fiction, even when there are strange and troubling coincidences."

Both Goscinny and Uderzo have since passed away, and the Astérix series lives on through writer Jean-Yves Ferri and cartoonist Didier Conrad.

Whatever the influence Erquy had on Astérix's creators, it is easy to see why this picturesque fishing port is considered by many as the definitive real-life version of the Gaulish village.

(With Ouest-Fance and Erquy's tourist bureau. Thanks to Jacques Borger)