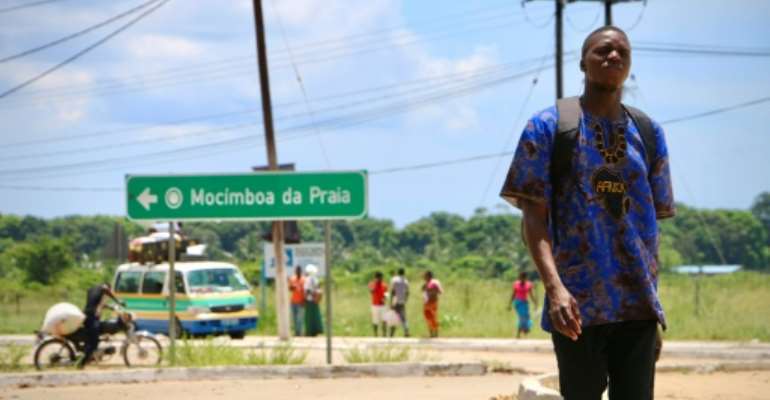 The entrance to Mocimboa da Praia, a northern Mozambique town that has been occupied by Islamist militants. By ADRIEN BARBIER (AFP/File)

The audacious attack and occupation of a strategic port in Mozambique's gas-rich province days before a summit of regional leaders will test southern Africa's counter-insurgency skills, analysts say.

Extremist fighters attacked the small but key town of Mocimboa da Praia -- the third such attack this year alone -- culminating in the capture of its port on Wednesday.

Mozambique's northernmost province of Cabo Delgado, which borders Tanzania, has been ravaged by a jihadist insurgency since October 2017.

But the government waited until April this year to admit the presence of so-called Islamic State militants in the country.

The jihadists have grown bolder in recent months, escalating attacks as part of a campaign to establish an Islamist caliphate.

Analysts hope the violence will be top of the agenda when leaders from 16 southern African countries meet for a routine annual summit on Monday.

During the summit -- to be held virtually due to coronavirus travel restrictions -- Mozambique takes over the rotating chairmanship of the Southern African Development Community (SADC) from Tanzania.

SADC should "urgently assist Mozambique to stem the violent insurgency" which has killed more than 1,500 people and displaced at least 250,000, said the Pretoria-based Institute for Security Studies (ISS) on Thursday.

It said the upcoming summit presents a "crucial opportunity to take decisive action to help end the crisis".

In May, SADC's security unit pledged to help Mozambique tackle the insurgency -- one of the toughest challenges southern Africa has faced in recent years.

But concrete action has yet to be seen.

"It is really time for SADC to intervene," said Maputo-based activist Adriano Nuvunga, director of Mozambique's Centre for Democracy and Development.

Struggling to regain control of the strife-torn region, the Mozambican army has hired private military contractors to help, including Russia's Wagner and the South Africa-based Dyck Advisory Group, according to various researchers.

But analysts say those efforts have been ineffective so far.

"Military action by the Mozambique government, including the continued use of mercenaries, has not stopped the attacks," the ISS said.

In a pre-summit meeting on Thursday, Mozambique's Foreign Minister Veronica Macamo spoke of the "need for consultation and coordination of our actions in combatting terrorism which poses a major threat to our region".

"Our region faces a threat... in the form of terrorism and violent extremism, which if not contained, has the possibility of spreading" throughout southern Africa, said the minister.

SADC set up a standby brigade in 2008 to respond to conflict situations.

The force was last deployed to restore security in Lesotho in 2017 following the killing of the kingdom's top army commander.

If sent to Mozambique, it will be the first time it faces terrorism.

"But it does not seem that SADC at this point in time is going to go beyond window dressing," she told AFP, noting that SADC lacked the military and financial might to put boots in Cabo Delgado.

Regional superpowers that could contribute troops such as South Africa are focused on militarily enforcing anti-coronavirus lockdowns.

South Africa also has around 1,000 soldiers serving in a United Nations mission in eastern Democratic Republic of Congo.

Even if regional soldiers were deployed, analysts suggest that would be redundant without tackling local frustrations that fuel the insurgency.

"If those issues are not addressed in the medium to short-term, deployment of soldiers will be nothing more than a plaster over an ulcer that is about to explode," Opperman warned.

Mozambican security forces have meanwhile been battling to regain control of the port.

Every attack on Mocimboa da Praia is a hindrance for the development of a liquefied natural gas (LNG) facility on the Afungi peninsula.

The project, situated 60 kilometres (40 miles) north of the town, relies on its port for supplies.

Mozambique's President Filipe Nyusi insists the multi-million dollar gas project -- one of the biggest single investments in Africa -- is safe.

But the latest attack, according to Nuvunga at Mozambique's Centre for Democracy and Development, shows an insurgency that is "gaining more ground and momentum" and is a "setback" in development of the gas project.

Experts had hoped the project would turn impoverished Mozambique into one of the world's leading LNG exporters, creating an African version of Qatar.