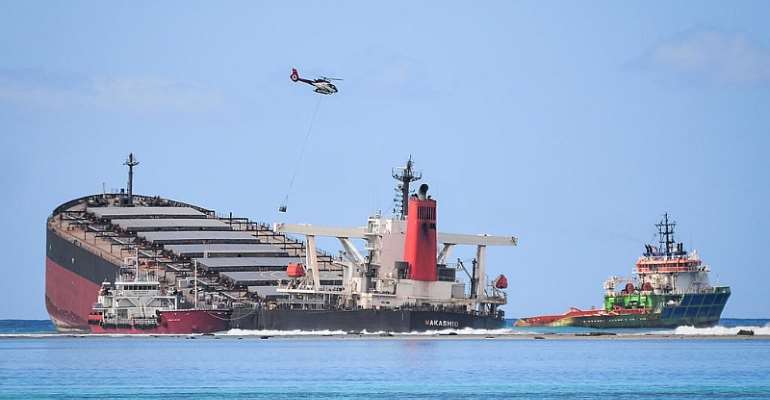 Japan's environment minister, Shinjiro Koizumi, said on Saturday his country planned to send a team of ministry officials and specialists to Mauritius to assess the damage from an oil spill.

The 203,000 tonne Japanese-registered bulk carrier was travelling between China and Brazil when it struck a coral reef off Mauritius on 25 July spilling just over 1,000 tonnes of fuel oil and triggering a state of environmental emergency.

On Friday, some residual oil from the ship leaked into the Indian Ocean, said Jacqueline Sauzier, the president of Mauritius Marine Conservation Society. "Booms have been placed around the ship to contain the spill," she added.

Most of the oil from the MV Wakashio has been pumped out. However nearly 200 tonnes fuel oil remains inside the vessel amid fears on Saturday that the vessel could break in two.

Koizumi said he regarded the oil spill as a crisis that could lead to a loss of biodiversity.

Pravind Kumar Jugnauth, the prime minister of Mauritius, asked for help from France, the former colonial ruler, on 7 August.

French president Emmanuel Macron responded to the request by dispatching military and civilian equipment as well as personnel from France's overseas territory of Réunion.