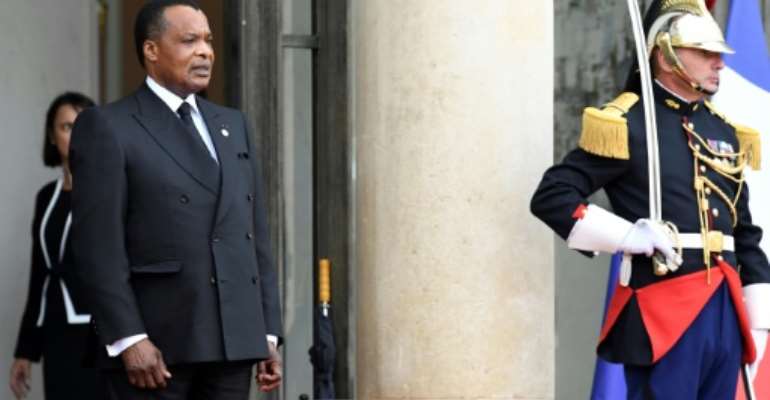 President Denis Sassou Nguesso has already been nominated as the candidate of the ruling Congolese Labour Party (PCT) in the next presidential ballot, due next March. By Bertrand GUAY (AFP/File)

Republic of Congo President Denis Sassou Nguesso on Saturday underlined the "progress" made in his country, a former French colony, in 60 years of independence despite most of its five million inhabitants living below the poverty line.

During a ceremony to mark the anniversary, Sassou Nguesso, who has been in power for 35 years, spoke at length about the infrastructure built in the central African country since it gained independence from France.

"At independence, our country did not have a single kilometre of asphalt pavement... today, we have a total of 3,111 kilometres (1,933 miles) of asphalt roads, with crossings on practically all our major rivers," he said in a speech to the nation.

He also pointed to an increase in large hospitals -- from one in 1960 to eight today and a dozen under construction -- and advances in education with more than 2,000 schools built across the country.

His enthusiasm was not shared by all, however.

"When President Sassou is satisfied with road construction, it's a joke," said Roch Euloge Nzobo, coordinator at the local NGO Human Rights and Development Circle.

"In 60 years of independence, Congo does not even have a motorway," he told AFP, adding that "corruption is endemic" throughout the country.

Sassou Nguesso, whose re-election in 2016 has been contested and has caused unrest, has already been nominated as the candidate of the ruling Congolese Labour Party (PCT) in the next presidential ballot, due next March.

After the fall in oil prices in 2014, the country's economy has been further weakened by the coronavirus pandemic. Congo has registered 3,700 cases, including 51 deaths, since March 14.

The Republic of Congo, also called Congo-Brazzaville, is struggling to implement the 48 measures imposed by the International Monetary Fund (IMF) as part of a three-year agreement signed in 2019 to revive its economy.

"Today, our budget revenues have fallen by 50 percent and the bulk of retirement pensions has also decreased by 50 percent," noted Ludovic Ngatse, the country's budget minister.