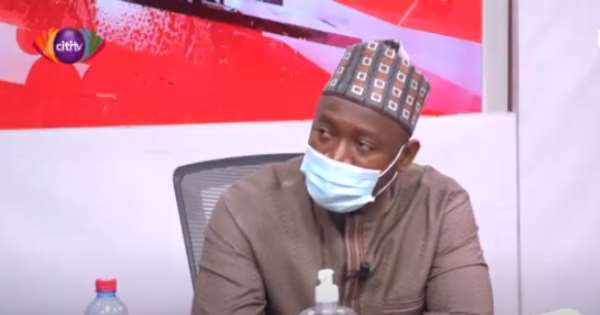 The Member of Parliament (MP) for Tamale North, Alhassan Suhuyini, has reiterated calls by his party, the National Democratic Congress (NDC) and other individuals for an independent audit to be conducted into the numbers from the just-ended voter registration exercise.

Accusing the Electoral Commission (EC) of failing to use a better system for the exercise as promised, Mr. Suhuyini argued that the audit will check deduplication and multiple registration issues caused by the “so-called advanced system” used for the exercise.

On The Big Issue, he said, “We spoke about the system and we thought that they were going to give us a better system. Now you are hearing the EC tell us that they have duplicates in their system. We all know that a very credible biometric system has a system of purging itself of duplicates. So how come that we spent that much for a system that was supposed to be better only for us to be told that we now have to do what may look like a manual deletion of duplicates. What went wrong with the so-called advanced system that the EC was going to use?”

“We are also suspicious based on our information that the EC’s own system may have contributed to duplicates so if we don’t audit properly, we are going to have people being deleted from the register through no fault of theirs. In fact, I’ve been told that as a result of a system challenge, you could click to register one person but when the system is slow and you double-click, it enters again and the numbers change. So for one person sitting before you, your clicks can enter two different numbers in the system. So that is why we are saying there is a need for us to do an independent audit and know what went wrong.”

When questioned as to whether it was necessary for the electoral body to conduct the audit by itself, the MP insisted that it was better for an external party to handle the auditing.

“We can recall during the Supreme Court case, at a point, the Court found it necessary to invite KPMG to the auditing of the numbers. I think we should find it important because it is critical to the survival of this country and the democracy that we are experimenting that we get an independent auditor to audit this because it’s not just because we cannot trust the EC to audit itself. Naturally, people tend to have suspicions when one has to audit itself. But it’s also because of a number of things they’ve told us that has not come to pass,” he remarked.

The voter registration exercise, which officially ended on August 6, 2020, did so with 16,963,306 persons registered to vote.

The Greater Accra Region had the most registered voters with 3,509,805 persons.

These figures, however, are expected to decrease after deduplication and adjudication.

The 16-member committee chaired by Deputy EC boss responsible for Operations, Samuel Tettey, is made up of political party representatives, civil society groups and IT personnel of the commission.

It has been tasked with manually reconciling cases where registrants' facial and biometric features as captured by the biometric registration kits conflict.