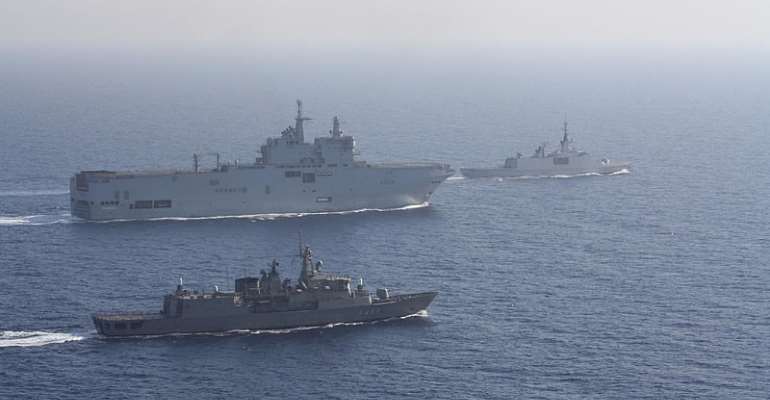 © via REUTERS - GREEK MINISTRY OF DEFENCE

Turkey has slammed France for acting like a bully and lashed out at Greece as foreign ministers from the European Union weighed in on the emerging crisis in the energy-rich eastern Mediterranean.

The search for oil and gas in disputed waters not far from Cyprus has pitted Turkey against its uneasy NATO ally Greece and the entire EU bloc.

Turkey's decision to send a scientific vessel accompanied by a small navy fleet into the volatile region on Monday prompted Greece to dispatch in its own military assets to observe what was going on.

France on Thursday also announced it was "temporarily reinforcing" its presence in the eastern Mediterranean in support of Greece.

That only further hurt France's relations with Turkey -- already damaged by opposing approaches to the Libya conflict and other parts of the Middle East -- and saw the diplomatic rhetoric rise another notch.

"France especially should avoid steps that will increase tensions," Turkish Foreign Minister Mevlut Cavusoglu said on a visit to Switzerland.

"They will not get anywhere by acting like bullies, whether in Libya, the northeast of Syria, in Iraq or the Mediterranean."

French President Emmanuel Macron retorted that his view on Libya and the Mediterranean were "convergent" to those of US President Donald Trump and UAE strongman Sheikh Mohamed bin Zayed Al-Nahyan.

"Our interests in peace and security are common there," Macron said in Paris. "We will ensure that it is respected."

Turkish President Recep Tayyip Erdogan underscored the fraught nature of the standoff by warning on Thursday of a "heavy price" to pay for those who threaten Turkey's Oruc Reis research ship.

"We can't let even the smallest attack go without an answer," Erdogan reaffirmed on Friday.

The president said "something like this" happened to the Oruc Reis on Thursday but provided no details.

Another warship accompanying Oruc Reis "gave the necessary response, and then they withdrew to their ports," Erdogan said, without specifying which nation's ships allegedly confronted Turkey's.

The Greek defence ministry denied being involved in any incident with the Oruc Reis.

Cavusoglu said that Turkey was seeking a peaceful end to the crisis and was only expecting "common sense" from Greece.

"Of course we do not wish to escalate," said Cavusoglu.

Turkey argues that Greece is using its control of a few tiny islands off the coast of Turkey to claim an outsized share of the Mediterranean Sea.

It also cites examples of past international agreements that gave the coastal power the right to waters despite another nation's islands near its shores.