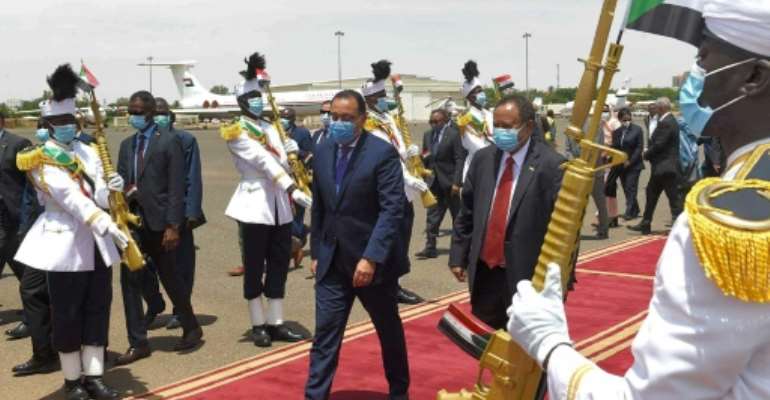 Hamdok (centre right) welcomes Madbouli (centre left) in Khartoum. It is Madbouli's first official visit to Sudan since the formation of its transitional government in 2019. By - (Egyptian Prime Minister's Office/AFP)

Egypt's prime minister arrived in Sudan on Saturday on a visit aiming to "improve cooperation" between the two neighbours, officials said, amid tensions over Ethiopia's Nile dam.

It is Mostafa Madbouli's first official visit to Sudan since the formation of a transitional government in Khartoum in 2019.

"The aim of this visit is to improve cooperation between the two countries in various fields," the office of Sudanese Prime Minister Abdalla Hamdok said in a statement.

The Grand Ethiopian Renaissance Dam (GERD) has been a source of tension in the Nile River basin ever since Ethiopia broke ground on it in 2011.

Egypt and Sudan view the dam as a threat to vital water supplies, while Ethiopia considers it crucial for its electrification and development.

Talks between the three countries were suspended last week after Addis Ababa insisted on linking them to renegotiating a deal on sharing the waters of the Blue Nile.

Sudan on Monday said negotiations had been postponed for a week.