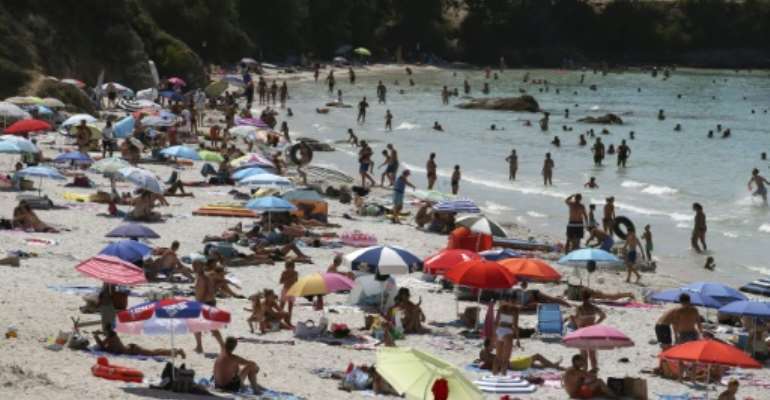 France is facing a resurgent wave of cases since the new disease emerged in China late last year, claiming more than 750,000 lives, infecting more than 21 million across the globe. By Pascal POCHARD-CASABIANCA (AFP)

Thousands of UK holidaymakers scrambled to get home to beat new restrictions on arrivals from European countries as a second wave of virus infections threatened more disruption and economic chaos on the continent.

France and the Netherlands were removed from a list of quarantine-exempt countries Friday, sparking a rush for plane, train and ferry ticket by Britons hoping get home before 4am (0300 GMT) Saturday, after which arrivals will have to self-isolate for 14 days.

France is facing a resurgent wave of the disease that emerged in China late last year and has so far infected over 21 million people and killed more than 750,000 around the world.

Authorities in France have reported more than 2,500 new cases for the past three days -- levels not seen since May.

One British couple said they had spent nearly 1,000 pounds (1,105 euros) to make it home via Eurostar from central France.

"I went to bed last night thinking it was all OK, woke up at 7am to find we had to get back here pretty sharpish," Stuart Buntine told the PA news agency.

Tthousands of Albanians queued in their cars at the Greek border, hoping to squeeze across and return to work before tougher entry requirements come into effect. By Gent SHKULLAKU (AFP)

Neighbouring Spain said it would close all nightclubs and ban smoking in the street where people are unable to stay at a safe distance, after the country reported almost 3,000 cases in 24 hours on Thursday.

Germany added all of Spain except the Canary Islands to its list of regions where incoming travellers must show a negative test for COVID-19 or quarantine for 14 days.

Austria urged its citizens to return from popular Mediterranean destination Croatia before similar rules come into effect on Monday, while Serbia introduced mandatory testing for travellers from four neighbouring countries.

And thousands of Albanians queued in their cars at the Greek border, hoping to squeeze across and return to work before tougher entry requirements designed to brake mounting infections come into effect.

Some people had been waiting for three days in the 20-kilometre (12-mile), 4,000-car jam, an Albanian police source said.

The US Department of Homeland Security also said it was extending a ban on non-essential travel through border crossings with Canada and Mexico throughout most of September "to slow the spread" of the disease.

French student Antoine, 23, had to rush back to Bristol, in southwestern England where he is at university, cutting short his summer holidays.

"I'm a waiter in a small cafe near college, I can't afford to spend 14 days in the house," he said at London's St Pancras railway station after getting off a Eurostar train.

French holidaymakers in the UK will be faced with tough choices of their own, as Paris swiftly announced a "reciprocal measure", although it was unclear when that might be imposed.

Britons rushed to buy plane, train and ferry tickets to try and get home from France before Saturday's deadline. By Ben STANSALL (AFP)

The Netherlands said it would advise against all but essential travel to Britain, but will not impose a quarantine of its own for incoming travellers.

Denmark and Hungary both reported their worst slumps since the early 1990s and Poland entered its first recession since the end of the communist era.

All eyes on vaccines

Hopes to break the cycle of outbreaks and lockdowns have turned to a vaccine, with Britain saying Friday it has secured access to another 90 million doses of two "promising" vaccines.

Number of new cases per day, trend in countries and regions, as of Aug 14. By Simon MALFATTO (AFP)

Vietnam meanwhile said it was looking to buy a bulk order of Russia's "Sputnik" vaccine, although Western scientists have raised concerns about the speed of its development and suggested that researchers might be cutting corners.

Mexico said it and Argentina aim to have a vaccine available for Latin America -- now the region with the worst virus toll and most cases -- early next year under a production agreement with drug giant AstraZeneca.

Washington said it would distribute any vaccine proven to be effective to all Americans for free. By CHANDAN KHANNA (AFP)

New Zealand is battling its second outbreak of infections and extended a lockdown of its largest city Auckland by at least 12 days, giving health authorities more time to trace and contain a variant of the virus previously unseen in the country.

The Pacific island nation's initial response to the pandemic was hailed a success, but a run of 102 days with no reported community transmission ended on Tuesday.

The country has now detected a cluster of 30 virus cases, and genomic tests indicated the latest infections were not the same strain of coronavirus recorded earlier this year.