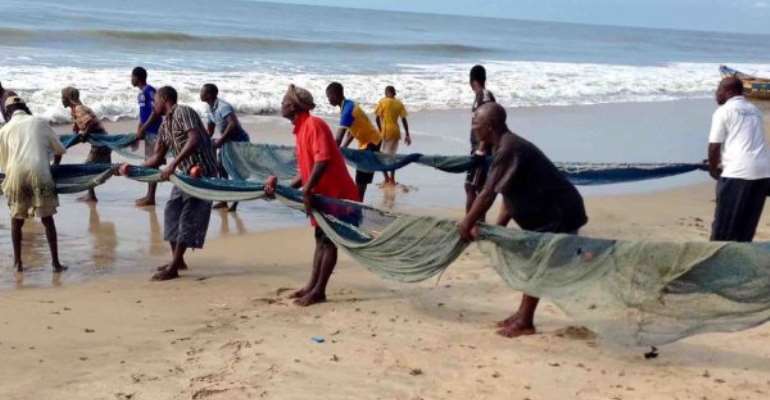 The Western Regional Branch of the Ghana National Canoe Fishermen Council (GNCFC) has appealed to President Akufo-Addo to bring to end activities of industrial pair trawlers engaged in illegal transshipment of fishing in the Ghanaian waters.

The massive activities of trawlers and illegal transshipment activities, popularly called "Saiko" was depriving artisanal fishermen involved in the artisanal fishing sector of their livelihoods and making them poorer.

This was contained in a petition issued and signed by the Regional Secretary of the GNCFC, Mr. Mike Abakah-Edu at the start of a nation-wide peaceful protest to register their displeasure against the activities of industrial fishing trawlers engaged in Saiko at Apewosika in Axim.

According to the GNCFC, chapter 718 of the budget statement, the government resolved to ban all domestic and international vessels found to be engaged in Illegal, Unregulated, and Unreported(IUU) fishing in Ghana's territorial waters.

Earlier, the fishers who were joined by other branches in the Region hoisted red flags and wearing red bands from the house to the beach with the inscription, "Stop Saiko Now" to create awareness.

The petition reminded the President who is the Co-Chair of Sustainable Development Goals (SDGs) and other stakeholders in the fishing industry, to enforce the law to bring the menace to a halt to secure the livelihood of more than 2.7 million Ghanaians.

The petition said the industrial fishing trawlers were given license to harvest demersal (bottom-dwelling) species but were now deliberately targeting the staple catch of the artisanal fishery, the small pelagics, and sell such fishes back to the local coastal communities at a profit.

The statement said the operations of the industrial fishing trawlers were largely contributing to the depletion and further collapse of Ghana's inshore fishery, therefore, undermining efforts of sustainable management.

It said an estimated 90% of the frozen block fish are juveniles, which deprived the Marine ecosystem of the opportunity to rebuild as fish did not reach maternity to reproduce contributing to the decline and near collapse of the small pelagics stocks or further impact on food security, nutrition, income, livelihoods, revenue, thereby, posing a threat to the economy and national security being referred to as "galamsey of the sea".

The petition indicated that though the artisanal fishery was in its bumper season of reaping the fruits of its labour of bumper catch, yet nothing of the sort was happening.

"Our beaches are silent. We spend so much to go fishing and return with nothing.No fish catch since bumper date".

The statement said besides the continuous depletion of the fish stocks by the industrial trawlers, they were also destroying fishing gears especially bottom-set-nets on a large scale.

The statement further noted that "Saiko" was a severely destructive form of illegal fishing according to the Fisheries Act 625 of 2002, section 132, and Regulation 1968 of 2010 section 33 as well as the Amendment Act and the Regulation which expressively prohibit transshipment-Saiko from trawler to canoe.

It said according to the Fisheries Scientific Technical Working Group (STWG), the fish stock was in imminent danger and the fishery could collapse completely by 2020 unless immediate action was taken.

The GNCFC observed the situation to be scary since the loss of Livelihoods would contribute to a rise in social vices and crime within the fishing communities and society in general.