Shaping The Moral Landscape With Music 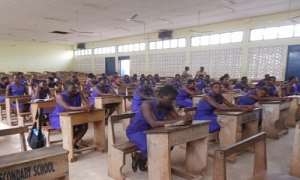 Early this week, most of us were outraged by the attitudes of a few senior high school students who behaved in ways that contradicted the moral obligation school authorities imposed on them. These students insulted the president of Ghana because they felt the past examination questions they answered in their studies did not reflect in their exams.

In responding to the unfortunate behaviour of these students, I want to look at how music is important in shaping the moral landscape of our students and virtually everyone. Historically, human beings have been burdened with the same questions: Who am I? Why am I here? Where do I go from here? Is there life after death? For centuries, virtually all the academic disciplines – from archaeology to zoology – have attempted to answer these questions from different perspectives. Religious institutions have also offered their responses.

As my reading affords me, I believe that music plays a crucial role in answering these questions and also shaping our lives to face the vicissitudes of life. The centrality of music in asking the penetrating questions of life was envisioned by a no mean a person than Friedrich Nietzsche, the German philosopher, who rightly observed that, “Without music, life would be a mistake.”

Music is the food of the soul. As observed by D.S.L. Konotey-Ahulu in his book, Sense & Nonsense in Christianity, music, as an art, is the most universal and most emotional expression of the soul of mortals. God created us as singing-beings, among other reasons. It is through music that we communicate our deepest sentiments; articulate our aspirations, and share our vision.

Music is coterminous to faith. It has the capacity to unite us with God, the ultimate reality. It is through music that the gap between the physical and metaphysical worlds are bridged. As music helps in establishing vertical relationships, it captures the soul and mind for the divine. It also becomes one of the channels of communication that enforces the mutual inclusivity between the physical and the metaphysical realms.

Given the centrality of music in the making of human beings, every human society thrives on music. We use music to mark all the major transitions in life. During naming ceremonies, marriages, and funerals we use music. Without music, these ceremonies would be superficial. They would only be a thin veneer on life (to paraphrase K.A. Busia).

There are occupational songs that serve as alibi to labour. As we work and sing along, we gain the psychological stamina to beat down tiredness. Farmers, hunters, and fishermen all have particular songs that identify them. When I was at the University of Cape Coast - UCC (2004-2008), I stayed at Kokoado, not very far from the sea. So, I had a few days that I joined the fishermen to haul their net. The rhythmic songs that accompanied the hauling was always a delight.

We also have recreational songs. As humans, we cannot be demoralized forever. Life is full of stress and so we need music to inspire us. We sing to entertain ourselves, as we sigh in hope. The use of “gyamaa” or “Morale songs” in our schools was part of using music for the purposes of recreation. Gyamaa songs were creatively composed in our boarding schools in the mid-nineteenth century, as a response to cultural alienation. The missionaries established the boarding schools to inculcate the Christian values into students of the Gold Coast (now Ghana).

Consequently, the boarding school was the social equivalent of the Salems – special enclaves that were founded to separate Christian converts from their non-Christian relatives in the nineteenth century. Adu Boahen, a Ghanaian professor of History, referred to the Salem system as a state within a state. The boarding school, therefore, had a similar vision of separating the students from their non-Christian relatives.

But these students deployed music to enact, recollect and rejoin their cultures and aspirations. Since they did not have church instruments, they used basic ones like castanet-like “firikyiwa” (finger pod bell), slit bell, “akasa” (gourd rattle enmeshed in net of beads/seeds), drums, and cooking utensils to accompany their music. The Gyamaa culture has persisted into our contemporary student life.

When I was at the West African Secondary School (1998-2001), gyamaa rehearsal was compulsory for all first-year students. Also, at the Casely Hayford Hall, my hall of affiliation at the UCC, we established ourselves as the superpowers of gyamaa and signifiers of gentle masculinity. We rightly held ourselves in sync with the spirit of our “father”, Joseph Ephraim Casely Hayford (1866-1930), who Ghana’s foremost cultural nationalist, Pan-Africanist, journalist, and lawyer.

Music has a therapeutic value. One of my professors at the University of Cape Coast (UCC), under whom I also served as a Teaching Assistant, N.N.N. Koffie used to tell me about how he used music to resuscitate a patient in a comma at the Komfo Anokye Hospital. This use of music is common in Western Europe.

Most importantly music defines our gregariousness. Through the call and response pattern in music, we identify with one another. Human beings are social beings, whose identity is defined according to their relationships with others. Aristotle was right in saying that, “Whosoever is delighted in solitude is either a wild beast or a god.” Kwame Gyekye, an eminent Ghanaian professor, articulated the Akan sense of communitarianism in the logic that when man fell from heaven (sky), he fell into human society. Our sense of sociality is reinforced through music.

In fact, indigenous songs are usually communally owned. There are no clear individual composers and owners. The performance involves an intersection between performers and audience. Certainly, this is not the same as saying that indigenous songs did not start with individuals as it is to say that such songs became collectively owned.

Music also inspires our actions. There are, therefore, military songs, liberation songs like reggae, that are composed to challenge all forms of injustice. Whether it is the “We shall overcome” song of the civil rights moment in the 1950s or “Lead, kindly light” of the Convention People’s Party also in the 1950s, music is used to mobilize people for a worthy political action.

John Collins, professor of Music at the University of Ghana, has written extensively about how popular musicians and entertainers openly supported Nkrumah’s bid for immediate independence in the 1950s. He wrote that most of these popular musicians indigenized their performances and recordings in a self-conscious ideological way in line with the “African Personality” and Pan-African ideals of Nkrumah and his Convention Peoples Party.

Related to the above is the use of music to challenge political maladministration. The Apoo festival of Wenchi had songs of insinuation to criticize bad leadership. The Ga and Ewe also creatively use music to correct political anomalies and shape moral behaviours. Alongside this is the use of music in oral cultures to recount historical facts and events. The griots in some of the Savana Regions in West Africa have a reputation for this.

Music is used for cultic purposes. It is said that African deities are music-loving deities. As a sequel to that, religious functionaries throw themselves into ecstatic singing and dancing to invite the deities during a ritual performance.

In an interview in January 2019, Apostle Prof. Opoku Onyinah, the immediate past chairman of the Church of Pentecost (2008-2018), indicated to me that the singing the accompany Holy Spirit baptism in many Pentecostal churches may serve as an overlap between Pentecostalism and indigenous cultures.

Definitely, music is an index of our humanity. This explains the importance that different cultures place on music. It also brings to the fore the importance of the entertainment industry.

(Un)fortunately, the proliferation of technology and youth popular culture have seamlessly conspired to trash the value of music. I am not in any way arguing that the culture of music is static and frozen in time. In fact, the culture of music is osmotic. But the value and function of music, in addressing the questions of life, are timeless. It is the near loss of the timeless value of music that we are worried about.

Given that music communicates and inspires action, one would have expected that contemporary music, including "gospel", would serve that purpose. We expect that whether popular music or “gospel” music, our music would carry a mission of shaping the moral conscience of listeners. Music cannot simply be a concatenation of voices and instruments. It should convey the deepest aspirations of the soul. It should be functional in informing people to appreciate their worth in human society.

But the more some of us listen to popular musicians sing, the more we see a lack of direction and purpose (other than materialism). In many cases, some of our contemporary popular music entertains and inspires “mindless” physical gesticulation, some of which are condemned in society. The didactic lessons invested in music has declined. A significant number of our musicians have lost their creativity in communicating the shared values of society and informing people to act as people of thought and think as people of action (to paraphrase Dr. Kwame Nkrumah).

Our generation appears to have lost the agility in oratory and lyrics. Nowadays, music is hardly laced with witty saying and oral competence. It is expected that music would accommodate the sublimity of our language, our philosophies, our visions and values as a people. Unfortunately, most of our contemporary musicians do not touch the base of our cultures. They tend to express a fusion of cultures that do not specifically respond to the challenges that have burdened Ghana and Africa.

In the face of all this, it appears we are in a progressive retrogression. Can't we do anything meaningful with contemporary popular music? It is time we incorporated some sense of direction and purpose in our music. As I have said, our music should reflect what we stand for as a nation. It should constitute the agency that Ghana and Africa have to advance the frontiers of human progression.

In my ethnomusicology class at the UCC, l appreciated the sagacity and prescience of our forebears. Their level of creativity in music is unique and unparalleled. They were gifted with a profound knowledge of the language, history, social and value systems of their cultures.

Strangely, some of the youth of today who are in the music industry largely glory in mindless insults ("beefing") and explicit obscenities. Sometimes, their songs are incendiary and downright meaningless.

The Bible enjoins Christians to do all things to the glory of God (I Corinthians 10:31). This means that music of all genres must glorify the Lord. If for any reason, one does not share any religious values, at least one is human enough to express values that advance the cause of life.

Our celebrities who are Christians should ask themselves: does my song inspire people to glorify the Lord?