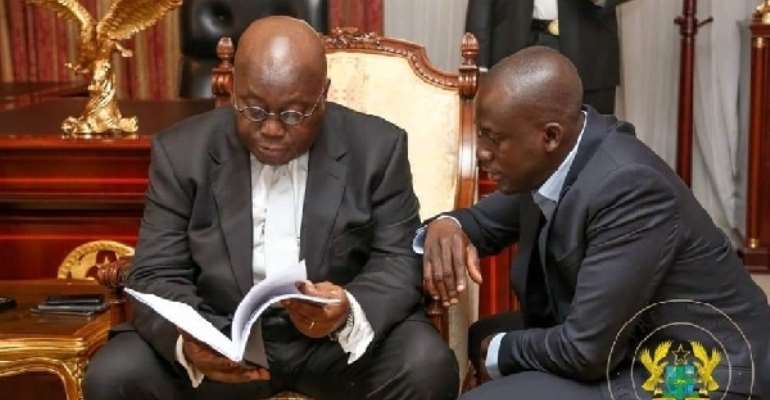 Executive Director of the Alliance for Social Equity and Public Accountability (ASEPA), Mr Mensah Thompson says President Akufo-Addo and his Director of Communication, Mr Eugene Arhin, have disrespected Ghanaians by responding to an official petition for the removal of the Chairperson of the Electoral Commission, Mrs Jean Mensa, via social media.

President Nana Akufo-Addo recently dismissed a petition by ASEPA for the impeachment Mrs Mensa for not filing her assets and liabilities on time after her appointment as the head of the election management body, as required by the Constitution. 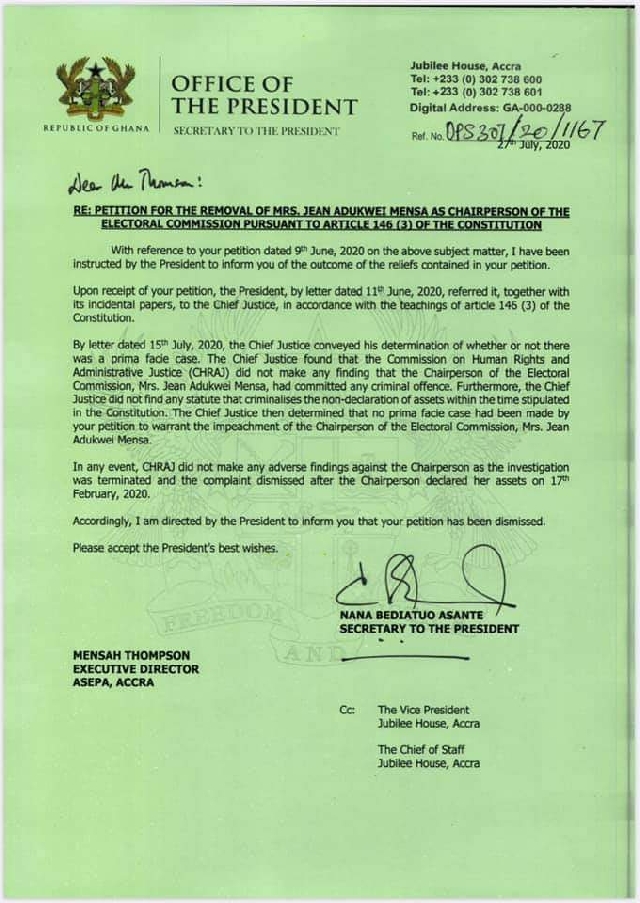 A letter addressed to Mr Thompson from the President’s Executive Secretary Nana Asante Bediatuo, said: “By letter dated 15 July 2020, the Chief Justice conveyed his determination of whether or not there was a prima facie case”.

The letter continued: “The Chief Justice found that the Commission on Human Rights and Administrative Justice (CHRAJ) did not make any finding that the Chairperson of the Electoral Commission, Mrs Jean Adukwei Mensa, had committed any criminal offence.

“Furthermore, the CJ did not find any statute that criminalises the non-declaration of assets within the time stipulated in the Constitution”, the letter said.

It also noted that: “The Chief Justice then determined that no prima facie case has been made by your petition to warrant the impeachment of the Chairperson of the EC”.

“In any event”, the letter added, “CHRAJ did not find any adverse findings against the Chairperson as the investigation was terminated and the complaint dismissed after the Chairperson declared her assets on 17 February 2020”.

“Accordingly, I am directed by the President to inform you that your petition has been dismissed”.

However, Mr Thompson is not happy that the presidency served notice of the dismissal of the petition via Facebook when no official response has been forwarded to ASEPA.

Mr Thompson said: “After releasing our statement on Thursday about the presidency sitting on the report, Nana Akufo-Addo’s Director of Communication, Mr Eugene Arhin, then quickly put up a statement on his Facebook wall as a response to our petition”.

“But does the presidency conduct its official business on social media?” Mr Thompson asked.

In his view, “Both the President and his Director of Communication have disrespected Ghanaians by conducting such official business on social media”.

“They have also disrespected the Constitution”, he added.

“So, as I speak to you, we have not received any official response from the presidency to our petition”.

Takoradi kidnapping conspiracy: We will establish the truth ...
57 minutes ago