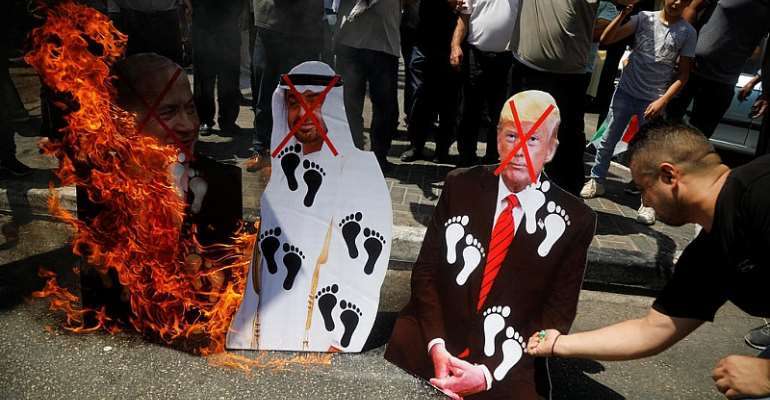 France has cautiously welcomed a landmark US-brokered deal establishing formal ties between Israel and the United Arab Emirates, calling Israel's decision to suspend annexations in the occupied West Bank a "positive step" but one that must become "definitive". Iran and Turkey denounced the pact as a betrayal of the Palestinian cause.

The so-called "Abraham Agreement" normalising relations between Israel and the United Arab Emirates was announced Thursday by US President Donald Trump, who told reporters in the Oval Office that it was “a truly historic moment".

Trump trumpeted that he had secured Israeli commitment to halt further annexation of Palestinian lands in the occupied West Bank in exchange for diplomatic ties with the UAE.

However, addressing reporters later in Tel Aviv, Israeli Prime Minister Benjamin Netanyahu said he agreed only to "delay" the annexation as part of the deal with the UAE, but the plans remain "on the table".

The conflicting statements have cast uncertainty over the future of the West Bank. The territory on the west bank of the river Jordan has been occupied by Israel since the 1967 Middle East war and is now home to some 500,000 Israeli settlers.

In January, the US had unveiled a peace plan that would have allowed Israel to annex up to 30 percent of territory, before making a U-turn and asking Israel to wait before executing that plan.

Israeli Prime Minister Benjamin Netanyahu, who hailed Thursday's peace deal as ushering in a "new era" for the Arab world and Israel, said later he would "never give up our rights to our land".

Fears that Israel will continue to expand its settlements in the occupied West Bank triggered alarm in France.

"The decision taken within this framework by the Israeli authorities to suspend the annexation of Palestinians territories is a positive step, which must become a definitive measure," Le Drian said in a statement on Thursday.

"The new state of mind shown by these announcements must now allow the resumption of negotiations between Israelis and Palestinians with a view to establishing two states within the framework of international law and agreed parameters, which is the only option to enable a just and lasting peace," he added.

Palestinian officials though rejected Thursday's agreement, calling it a "betrayal" of the Palestinian cause.

No perfect deal
In the past, the UAE, like most of the Arab world, rejected diplomatic ties with Israel in the absence of a peace deal establishing a Palestinian state on lands captured by Israel in 1967.

But in recent years, ties between Gulf Arab nations and Israel have quietly grown, in part over their shared enmity of Iran and the Lebanese militant group Hezbollah.

“Is it perfect? Nothing is perfect in a very difficult region,” he said. “But I think we used our political chips right.”