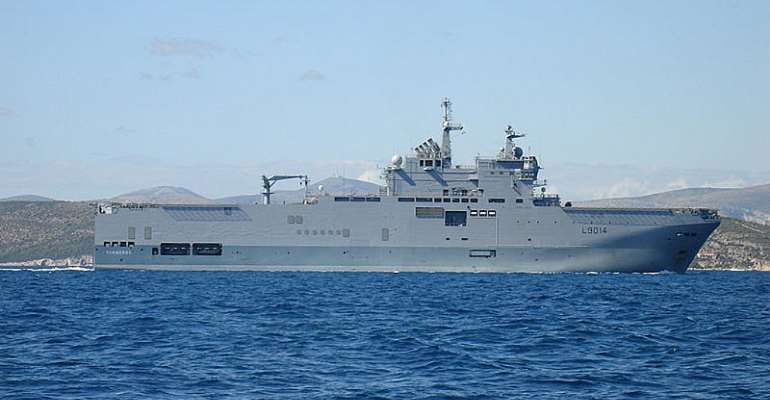 The French military helicopter-carrier 'Thunder' has arrived in Beirut to help in the rescue and clean-up operations following last week's deadly blast, which destroyed much of the city's port. It coincides with a visit from the French Minister of Armed Forces, Florence Parly.

The French military vessel, Tonnèrre (Thunder), carrying 350 military personnel and supplies arrived in Beirut on Thursday evening and was to unload its cargo on Friday.

An underwater de-mining patrol checked the area before allowing the ship to dock.

Beirut port and the immediate surrounding area was ravaged by two massive explosions on 4 August, which killed nearly 200 people and injured thousands more.

The blasts were caused by a supply 2,750 tons of ammonium nitrate which had been stored at the port for six years.

Several countries, including France have sent teams of rescue workers to assist Lebanese authorities as the complex clean-up continues.

The arrival of the military ship coincides with the visit of French Defence Minister Florence Parly who arrived on Thursday and will stay 24 hours in Lebanon to meet local officials.

She will also inspect the operations carried out by Thunder.

Military expert General Dominique Trinquant told France Info that Thunder is like a "Swiss Army knife" as it has multiple functions – serving during the peak of the Covid-19 crisis as a field hospital, for example.

Trinquant said the vessel was carrying fire trucks, among other items, as a donation to the Lebanese authorities whose vehicles were destroyed in the blasts.

Thunder also transported 75,000 army rations, large quantities of flour, since much of Beirut's reserves were destroyed in the blasts, as well as medical supplies, tools and building equipment such as plaster, glass, and cement. Some 350 troops aboard are to assist with the clean-up of debris at the port, an task likely to take several weeks.

French President Emmanuel Macron was the first world leader to visit the city after the explosions, and oversaw a United Nations summit to raise international aid for the country.

The Lebanese people welcomed the French president's intervention, but called for all aid to go directly to the people. They expressed anger over what they say is a corrupt political leadership.

The government of Prime Minister Hassan Dian resigned on Monday and will remain in a caretaker mode until a new cabinet is formed.

Anti-government street protests, which started last year, have intensified despite the government's resignation.