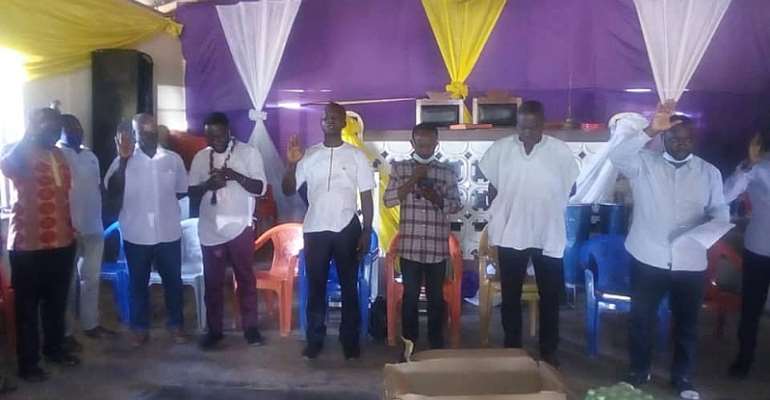 At the launching ceremony held in Akumadan on Wednesday 13th August, 2020 led by former DCE and member of the Ashanti Regional campaign team Hon. Oppong Kyekyeku, party activists drawn from all branches demonstrated a strong sense of enthusiasm and unanimously accepted the challenge of a die-hard affair towards snatching the seat from NPP.

"Please please and please again if you don't work hard to win this year, that's our end," Hon. Kyekyeku begged party folks whilst on his knees.

He lamented the heavy defeat in the last election and passionately called on them to make unity and cohesion their epitome adding this year's campaign in Offinso North should be an 'all involvement' affair to unseat Mr Ntim.

Hon Kyekyeku after swearing-in the campaign team members charged them to map out better strategy this time to ensure their first in many years victory in Offinso North constituency.

In an interview after the program, party chairman and head of the campaign team Jean Kwame Appiah identified some mistakes in the past leading to their inability to record a single win in five major elections and vowed never to repeat them in future.

He stated that despite his party's numerous infrastructural development, they did not see the need to tout or organize funfairs in announcing to the public but believed in its impact on the people to do the talking for them.

"I am charging all my members to embark on vigorous house to house persuasive campaign devoid of insults and abusiveness," Mr Appiah Offinso North constituency chairman.

Parliamentary Candidate, Hon. Ofosu Acheampong Caesar expressed confidence in the team inaugurated describing it as "a winning team" seeing the calibre of people making the membership and their all involved campaigning strategy about to go down.

He was happy with the kind of support characterized with love and unity from rank and file towards a common goal of winning the Offinso north parliamentary seat.

He believes his personality will contribute a lot in their quest and therefore appeals to all party faithful to endeavour to sell his 'good' brand to the entire Offinso north.

Other key personalities at the function were parliamentary aspirant Nana Yaw Baafour Frimpong who pledged commitment to support the course urging supporters to strengthen unity.