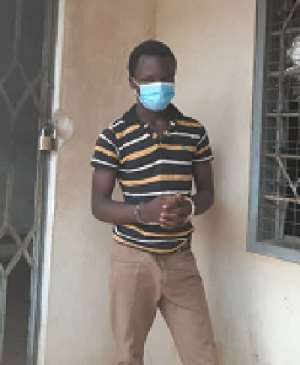 An 18-year old unemployed, Kwaku Mensah was on Thursday August 13, 2020 sentenced to 18 years imprisonment by Bibiani Circuit Court in the Western North Region for defiling a four-year-old girl.

Kwaku Mensah who lives at Dabiasem, a suburb of Dadeaso in the Western North Region, pleaded guilty to the charge and was convicted on his own plea.

Chief Inspector Benjamin Owusu Agyeman, the prosecutor, told the court, presided over by His Honour Yaw Owoahene Acheampong that on, July 5, this year, at about 22:00 hours the victim's mother sent her to give corn to the suspect after he requested for it but he decided to defile the girl after taking the corn.

He added that the four-year-old child was abandoned in a bush for about four hours after he was defiled by the suspect.

Prosecution further stated that, the victim was found tied up in a pool of blood almost 5:pm and rushed her to the Dadieso Hospital but she was later referred to Juaboso for treatment.

Police at Dadeaso upon official complaint arrested Kwaku Mensah the next day and was arraigned before the Bibiani Circuit court after days of investigation.

A medical report of the victim indicated that she suffered multiple tears on the walls of her vagina with her hymen broken.

Kwaku Mensah was charged with the offence after investigations, the prosecutor added.

He however explained that the vagina of her daughter has been completely damaged, forcing her daughter to pass stools in her genitals.

He added that the victim now passes bowels in pain and will cry throughout the period. "We have done our best but running out of money and will appeal to Ghanaians to support us,” he said.