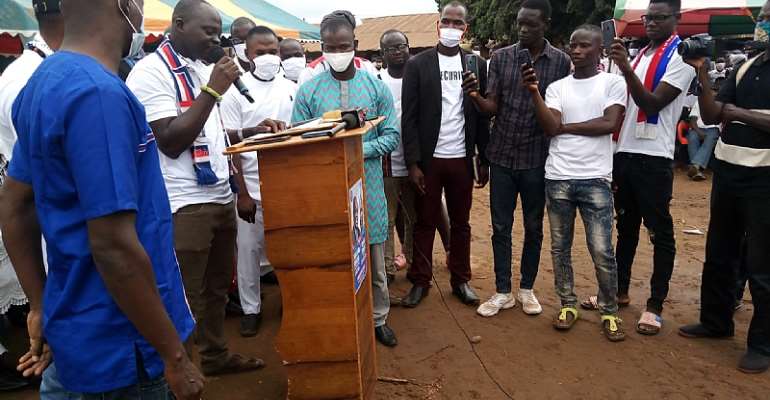 The Wulensi Constituency NPP youth wing has sent strong messages to the pseudo youth group calling itself Concern NPP youth in Wulensi who after primaries have joined hands with the opposition NDC to cause havoc in Wulensi.

This follows a petition by the Concerned Youth of the New Patriotic Party group in Wulensi to President, Nana Akufo-Addo to sack the District Chief Executive (DCE) for the area, Natogmah Munkaila immediately, over allegations of incompetence.

The group however, presented a petition to the Coordinating Director for onward submission to the President for his removal following a demonstration.

The petitioners accused the DCE of non-performing, a failure seeking to divide the party in the District amid other atrocious acts.

In reaction, the convener, Yakubu Mohammed Razak at a press conference addressed by the Constituency Youth wing of the party outlined unprecedented performance by the DCE since he assumed office in 2017.

He also revealed that the recent demonstration and subsequent petition is premised on perception that the DCE supported the incumbent Member of Parliament during the parliamentary primaries.

Mr Raak stated that, the DCE for his three and half years stay in office has performed creditably and needs to be applauded rather than tarnishing his image.

According to the convener, the DCE has constructed 40 pavilions at the Wulensi market, handed over 210 ruminants, 3 deep freezers and five sewing machines to people with disabilities. He has also lobbied for a medical doctor who has accepted posting and would soon report to work.

He added that claim that Wulensi health center has been downgraded to a CHIPS compound cannot be true.

"The fact of the matter is that, the only physician assistant in the hospital went for further studies and per regulations of the Ghana Health Service in the absence of the physician assistant, certain ailments cannot be admitted by the facility. This situation has since been resolved. A physician assistant has been posted to replace the one on study leave," he stressed.

Mr Razak continued, "The claim that the DCE could not foot a bill of GHC 300 to extend electricity to Gbungbaliga CHIPS compound cannot be true. The project itself is being constructed by the assembly and provision of electricity is the responsibility of the assembly which is being worked on."