‘Bawumia Should Compare Himself To Lilwin; Not Jane Naana’ – Akamba 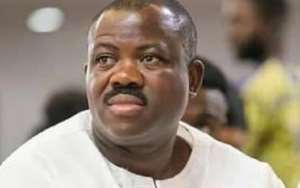 He believes the achievements of the former Minister for Education at the University of Cape Coast (UCC) and in the Education Ministry sets her apart from other professionals who are in politics today.

Akamba, who was speaking to Kwame Minkah on Dwaboase on Power FM, observed that he had heard that some members of the ruling New Patriotic Party (NPP) have began comparing their Running Mate to Dr Bawumia, a renowned economist who entered active politics prior to the 2008 elections.

The Vice President, who promised to assist President Akufo-Addo to make Ghana a comfortable abode for Ghanaians, has come under intense pressure in recent days for the government’s failure to achieve most of the promises the NPP made to Ghanaians in the run up to the 2016 elections.

Bawumia had promised to get water and facilities to every village in the first two years of the NPP’s administration. In 2017, the Vice President pledged to lead the government to get every Ghanaian to have a bank account by the end of 2019 as part of measures to ensure financial inclusion in the country.

Dr Bawumia said “Financial inclusion is very key to the economy. We have to make sure that everybody practically has a bank account”, adding that “this is how we are going to change the economy”.

Both promises have not been met with road contractors not paid in full to carry out road projects across the country as the Mahama administration had envisaged.

The development has brought untold hardship to contractors, contrary to what the NPP promised them before the 2016 polls.

Corruption under Akufo-Addo has heightened so much that the NPP government has not come close to the record of the NDC government in corruption fight, according to the last Corruption Perception Index (CPI) ratings.

To this end, Akamba said Dr Bawumia mounts political platforms to make mocery of the government with the “NPP’s so caled achievements,” adding that the One District, One Factory the NPP promised Ghanaians for sustainable jobs have not been successful.

According to Akamba, Professor Opoku Agyemang has carved a niche for herself unlike Bawumia who does not keep to his promise and superintends over a weak eceonomy despite the huge resources at the government’s disposal.

We Won’t Lie To Ghanaians

Akamba’s assertion comes after the Running Mate for the NDC, Professor Naana Jane Opoku-Agyemang assured that the NDC’s promises to Ghanaians were well calculated and achievable.

The former Education Minister stated that the NDC’s flag bearer, H.E John Mahama, and the party had a fair appreciation of the challenges confronting the country and planned towards finding lasting solution to them when voted into power in January 2021.

“Whatever our flag bearer says is what we will do,” Prof. Opoku-Agyemang reassured in her speech after she was officially introduced to the National Chief Imam, Sheikh Osmanu Nuhu Sharubutu, at Fadama Wednesday afternoon by H. E John Mahama.

According to her, the promises of the NDC to Ghanaians were thoroughly examined and “not promises that we cannot fulfil,” stressing that the largest opposition party was poised to place Ghana on a path that will bring about development.

She also pledged the NDC would improve on the various policies the previous regime had implemented to ensure the national cake was shared equally regardless of one’s religion, political affilliation and ethnicity.

“We intend to improve education…It’s about investing in people…People who don’t wait for others to tell them what they can do or what they cannot do,” she added.