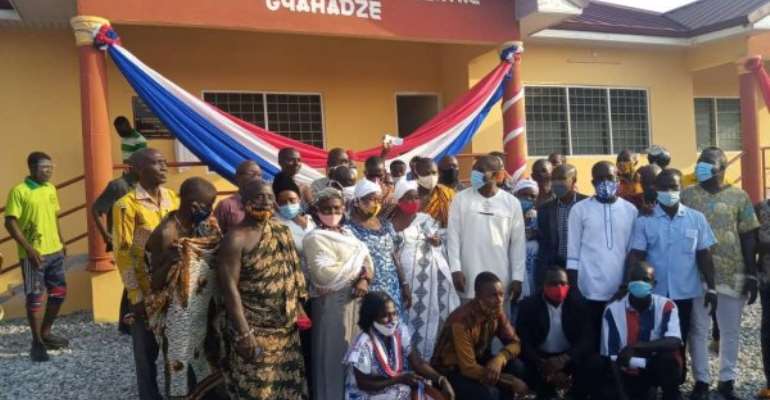 Mr Alexander Ato Kwamena Afenyo-Markin, Member of Parliament (MP) for Effutu Constituency has appealed to traditional and opinion leaders in Effutu Gyahadze a community in Effutu Municipality to bury their differences and forge ahead in unity to pursue a common goal and interest.

“Without peace, no meaningful development can take place in any community and it is important to cool down tempers, settle whatever have inspired between you or else the youth who are the future of the country will follow same and retard the development of the area”, he stated.

Mr Afenyo-Markin made the appeal in an address he delivered at the inauguration of a Health Centre he constructed at Effutu Gyahadze and named after the late Nana Heitey I, first chief of the community.

He commended the chiefs who gave the land for the project, the Municipal Health Directorate and all who supported in diverse ways to make his dream come through.

According to him, the construction of health facilities in the rural Cpmmunities in Winneba was to help ease the stress the people go through in accessing health care.

The Facility, he said was at the door step of his constituents to stop the practice of travelling long distances from their communities to the capital town to seek health care services.

“We need unity to envelop our communities and as I have been saying I cannot offer you silver and gold, but basic amenities; the little, little things we need in our communities to make life meaningful, will be my attention for us to build Effutuman, the Gate Way to Central Region together”, he stated.

The Member of Parliament announced that plans were far advanced for the construction of an ultra-modern Children's Hospital to be sited between Gyahadze and Gyanganadze communities in Effutu municipality, which the chiefs and opinion leaders have accepted.

After completion, it will cater for children in Effutuman and other children in Central Region that needed critical health care.

He also thanked the Chief and elders of the community for providing land towards the construction of estate buildings for workers and others in the Area.

Construction of new buildings for the High Court, Fire Service, Internal Revenue and Health Insurance offices are on-going at the opposite side of the Estates, which was about 70 percent completed.

The MP said government was delivering all its promises and urged the people not to listen to people with empty promises, but stand firm to support the government and President Nana Akuffo Addo to better their lots.

The promises he said, included; the free Senior High School (SHS) programme that made education accessible to many students and many other interventions and urged the youth to take advantage of such opportunities in place to become empowered and well informed in the society.

Dr George Kwame Prah, Director at the Specialist and Trauma Hospital in Winneba, applauded the MP for his continuous support towards quality health care delivery in the area and assured that the Ghana Health Service (GHS) would use the Facility for the purpose for which, it was built.

He appealed to the people to play their roles well as citizens, especially to support the personnel posted to man the facility and also patronize their services to make it functional.

Nana Obinefo Ninson, Tufuhen of Gyahadze on behalf of the Chief of the area was full of praise for the MP for fulfilling the promise made to them and pledged to ensure that the Facility was well patronised.

Later Madam Mariatu Seidu, Acting Director of the Effutu Health Service, Mr Eyie Acquah, Presiding Member of Effutu Assembly who chaired the programme and other dignitaries joined the MP to cut the tape to symbolise the inauguration of the clinic.