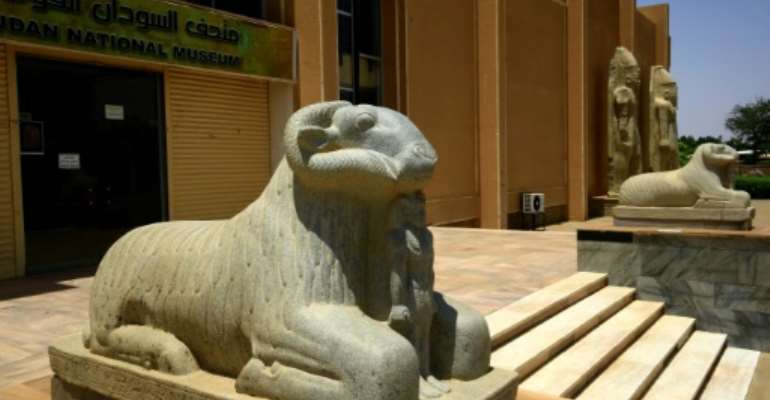 These statues guard the entrance to the Sudan National in Khartoum which is to get a face-lift after years of neglect. By ASHRAF SHAZLY (AFP)

Sudan National Museum, which houses thousands of priceless antiquities dating back millennia, is to be closed for lengthy renovations after years of neglect, its director told AFP.

The museum, which opened in the 1970s, is home to more than 2,700 objects including some dating back to the Paleolithic period and important pieces from the ancient Egyptian Pharaonic dynasties and from Nubian culture.

"All these pieces are originals, apart from a few statues which are copies because the originals are in the Kerma museum" in the country's Northern state, said Haitem el-Nour, new director of the national corporation of antiquities and museums.

A grant of a $1 million has been put up by the Italian Agency for Development Cooperation to fund the works, which will be carried out under the supervision of UNESCO.

The museum, which was opened in 1970, houses more than 2,700 objects some as old as the Paleolithic period, as well as important pieces from the ancient Egyptian Pharaonic dynasties and from Nubian culture. By ASHRAF SHAZLY (AFP)

"This is coming at the right time as the building really needs to be renovated as well as the display cases," said Nour.

The museum will close on September 1, with the renovations to be finished by either late next year or early 2022.

The irreplacable items have been left collecting dust in the building for years, with no air-conditioning to protect them from the scorching Sudanese temperatures.

Now they will have to be carefully removed from the building and placed into underground storage to protect them from light before the work begins.

Haitem el-Nour, new director of the national corporation of antiquities and museums says the facelift is coming at the right time to help save the antiquities. By ASHRAF SHAZLY (AFP)

When the museum reopens, Nour hopes to be able to put on display some other treasures which have been uncovered over the past decade and never shown to the public.

He also hopes the new museum will encourage tourism in the country, which has embarked on a new path since last year shaking off 30 years of iron-fisted rule under dictator Omar al-Bashir.

MMDCE appointments shouldn't be seen as job for the boys' - ...
27 minutes ago