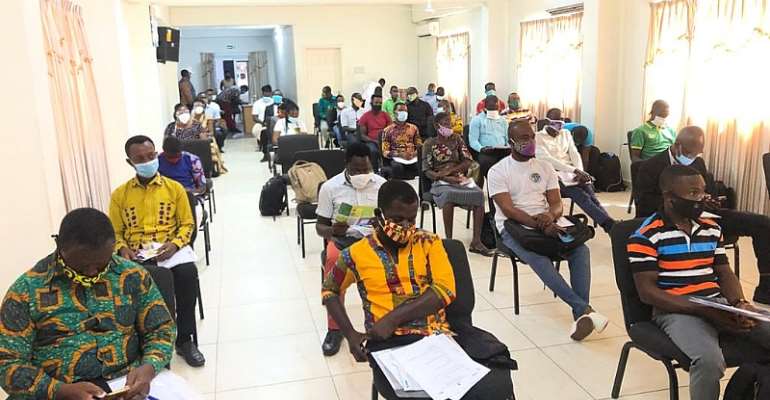 The Western region has taken its turn of ‘Trainer of Trainers’ sensitization on the dangers and management of the Aflatoxin being undertaken by the Ghana Standards Authority (GSA).

From the same region, some 40 Agric Extension Officers have received their training.

The programme falls in line with the National Aflatoxin Sensitisation and Management (NASAM) project supported by the Alliance for Green Revolution Africa, (AGRA) to educate farmers, Agric officers on best practices in the fight against Aflatoxin.

The team also used the opportunity for community visits to some parts of the region.

The AEA’s are in direct contact with farmers consistently and would be very instrumental in the fight against Aflatoxins, thus, the NASAM Team finding it very important to involve them in sensitizing farmers.

The first community the team visited was a community called Whindo where they interacted and educated grains farmers in the whole area.

The event drew together about 100 farmers who showed high interest.

The second community visited was Assakae, a very vibrant trading town where about 50 farmers and traders of grains were sensitized on the dangers and measures to curb the Aflatoxin menace.

The farmers raised genuine concerns on the need for the government to support them and also help address the issue of the lack of ready markets.

They further decried the high cost of farm inputs.

The Ministry of Food and Agriculture (MoFA) Director for Western Region, Mr. S. Y. Apiigya, who graced the training event emphasised the harmful effects of Aflatoxins on both crops and animals.

He urged the Agric Extension Officers who were present at the training to pay attention to the education which is about to be imparted into them since this menace goes through the food chain.

On his part, the Business Development Manager of GSA, Mr. George Anti, also emphasized the need for the farmers to take this sensitization with all the seriousness it deserves.

“This is because Aflatoxins pose serious health effects to both humans and animals as well as affecting our economy badly when goods are rejected from entering the EU and other countries when the Aflatoxin levels are high,” he noted.