Some men are as guilty of skin-bleaching as women 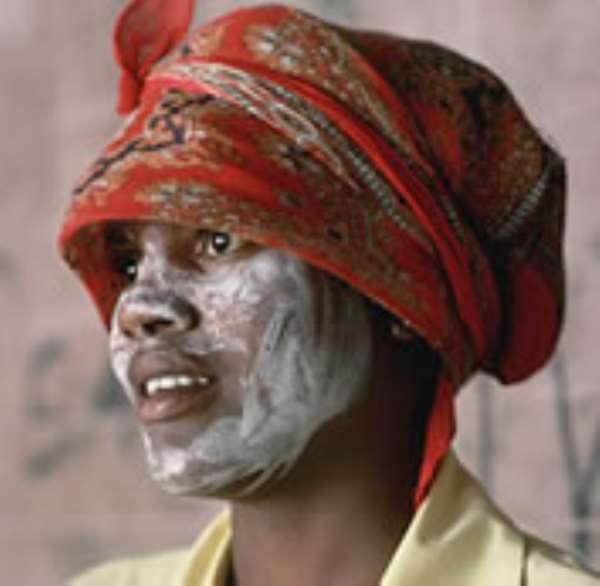 SOME MEN ARE AS GUILTY OF SKIN-BLEACHING AS WOMEN

That most Ghanaians at home continue to think along stereotypical and sexist lines is at once quite amusing and disturbing. An August 13, 2006 news article posted on Modernghana.com, and sourced to the Ghana News Agency (GNA), had a beauty therapist exhorting the country's men-folk to discourage (dissuade?) their women from resorting to the perennially humiliating practice of skin-bleaching.
What is at once amusing and disturbing about Mrs. Agnes Konadu Oduro's call is its facile presumption that all Ghanaians who bleach are, as a rule, women. Interestingly, when I shared the contents of the article with my wife, who has only been resident here, in the United States, for two years, she almost fell off our couch with laughter. And once her fit of laughter subsided, Mama Afua Oye started listing a slew of prominent Ghanaian men, largely musicians and other celebrities, who have been known to bleach their skins.
In sum, while I wholeheartedly agree with Mrs. Oduro that skin-bleaching is a tragic reflection on Ghana's embarrassing colonial past, the pat assumption that, somehow, many a Ghanaian men-folk escaped such psychological trauma is rather risible. And on this score, need I regale the reader with my own list of Ghanaian males resident right here in New York City who bleach their skins and, perhaps, also their brains?
And it also goes without saying that two decades of despotic domination of the Ghanaian political landscape by a Eurocentric mixed-breed Ghanaian president have done little to meliorate this blistering blight of inferiority complex. For instance, during most of the 1980s when he “served” as Ghana's peremptory strongman, Mr. Rawlings was widely known to make frequent visits to the Scottish Highlands in desperate search of his absentee father's recognition and approval. The former Ghana Air Force pilot even once sat on American Television – CBS-TV, to be precise – tearfully lamenting his summary rejection by his Scottish father to the renowned TV-host(ess) Ms. Diane Sawyer. For yours truly, nothing could have been more embarrassing, particularly coming about the very time that Mr. Rawlings was at the peak of his anti-American, anti-Western and anti-imperialist tirade. For, in brief, it pathetically demonstrated the fact that lurking closely beneath the surface of his apparent, or ostensive, disdain for the Western white-man was a deep-seated itch to be white and validated. It is also significant to observe that it was about this time that Mr. Rawlings exuded his most insuperable contempt for Ghanaian citizenry, particularly our traditional and postcolonial leaders.
Needless to say, it is indispensably edifying for renowned beauty therapist Mrs. Agnes Konadu Oduro to highlight the clinical risk that skin-bleaching entails, particularly regarding the grim possibility of the bleacher contracting skin cancer, in view of our sultry tropical climate.
And here also, perhaps, it may be worthwhile pointing out to those unsuspecting bleachers that come summertime, and one would be wont to seeing most European-Americans who frequent the beach, or such similar open spaces, almost invariably do so under the cover of skin-protecting creams, also called “sun-screens.”
Likewise, hundreds of thousands of white men and women visit places equipped with saunas, or expensive skin-tanning machines, in order to acquire a modicum of “natural” protection against the ultra-violet rays of the sun, something that indigenous people of African descent, as well as other dark-skinned peoples globally, have been endowed, gratis, by God or Nature.
Another significant issue raised by Mrs. Oduro regards the imperative need to raising the training standards of beauticians all across the country. Indeed, some of our readers may not believe this, but here in big-town America, particularly the proverbial Big Apple, or New York City, even hair-braiders and hair-threaders, (largely Francophone Africans), have to be licensed in order to legally practice. Of course, not only does this ensure that tax revenue will be duly collected for the development of social services and infrastructure, otherwise known as improvement in quality of life, it also ensures that the environment in which this trade is being practiced is safe and sound, hygienically and architecturally speaking.
In sum, perhaps rather than title the story: “Discourage Females From Bleaching – Men Urged,” the more appropriate caption ought to have been: “EDUCATE ALL SKIN-BLEACHING GHANAINS TO DESIST – BEAUTICIAN URGES.”
*Kwame Okoampa-Ahoofe, Jr., Ph.D., teaches English and Journalism at Nassau Community College of the State University of New York, Garden City.