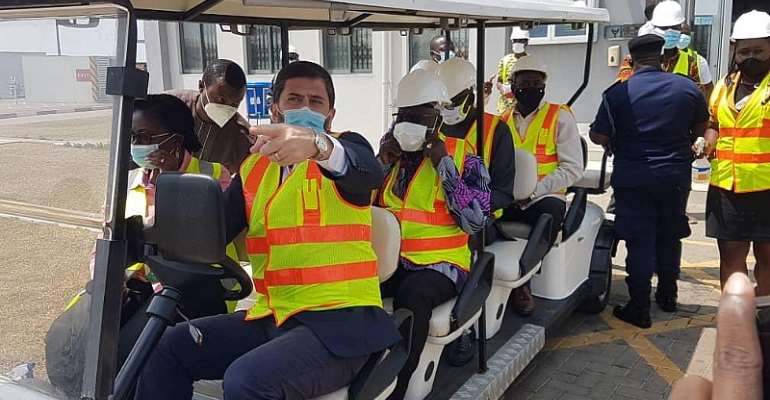 Senior Minister, Yaw Osafo-Mafo, has observed the need for government to sustain its support towards the treatment of sewerage in the country.

He was speaking on Thursday, August 13, 2020, shortly after embarking on a familiarization tour of the Lavender Hill Faecal Treatment Plant.

The Minister was impressed with the works being done at Lavender Hill Faecal Treatment Plant and assured management of Government’s assistance to make the Sewerage Systems Ghana Limited a profitable and viable firm.

Lavender Hill Faecal Treatment Plant which was commissioned in 2016.

According to the Minister, the President Nana Akufo-Addo’s Government would ensure that the Lavender Hill Faecal Treatment Plant is replicated in other parts of the country specifically Kumasi, Tamale, Tema, among others.

Government support is not one time, it must be continuous, Mr Osafo-Mafo said, as he thanked the management of Lavender Hill Faecal Treatment Plant.

He stated that it is the duty and responsibility of government to ensure the financing of the treatment of sewerage, saying sewerage is a waste and it must be treated.

Managing Director of Sewerage Systems Ghana Limited, Haidar Said, stated that the facilities his outfit has contributed so far have provided at least 300 director jobs and almost a thousand indirect jobs.

He stated that by the time the company finishes the Kumasi, Tamale and Tema projects, there will be about 1,200 direct jobs and over 5,000 indirect jobs.

He added that Kumasi project estimated completion is around the end of October or early November this year.

According to him, the Tema project is to cost about €75 or 76 million.

General Manager of Sewerage Systems Ghana Limited, Florence Cobbold, told the press that the Kumasi project is about 100 or 120 truck per day capacity or 1000 cubic meters.

The Lavender Hill Faecal Treatment Plant is about 2,000 cubic meters a day.

She noted that sewerage management is very important and that there is the need to see waste as money, saying that waste management forms part of the secular economy.

Present during the visit were Mayor of Accra, Mohammed Adjei Sowah; Chairman of the Jospong/Zoomlion Groups of Companies, Dr Joseph Siaw-Agyapong.

Takoradi 'azaaa' woman still in custody as she fails to meet...
19 minutes ago