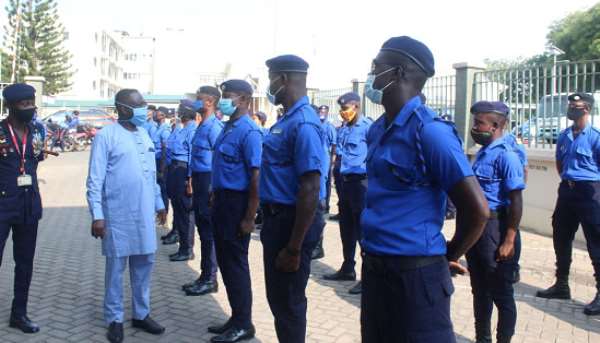 The management of the Korle Bu Teaching Hospital (KBTH) says they have put in place new measures to boost the security of its staff and patients while on the facility.

The hospital has thus revamped its internal security department, branded the uniform of the security personnel and provided the needed logistics for them to effectively discharge their duties.

It also organized a reorientation programme on new developments in the field of security for the personnel.

Chief Executive Officer (CEO) of KBTH, Dr. Daniel Asare, who inspected the first assembly of the security personnel in their full uniform, expressed hope that the changes would help enhance the protection of lives and property.

Speaking with the media after the inspection, Dr. Asare said the security of the hospital staff was a priority to management; adding that in recent times there have been incidents of theft at the health facility.

He therefore noted that the security lapses had to be addressed hence the move to properly clothe and reorient the internal security of the hospital.

He noted that apart from the support given to the internal security personnel, the hospital management had also mounted CCTV cameras at entry and exit points as well as in some critical departments.

He further noted that management had also outsourced some of its security activates to private organizations to augment the work being done by its internal security.

“I hope they will deliver, with the new measures taken to ensure they are up to date with security issues at the hospital,” he said.