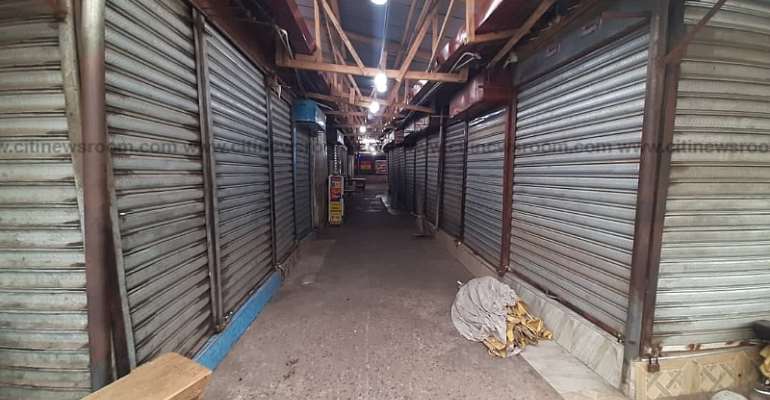 There is tension mounting at Tiptoe Lane at the Kwame Nkrumah Circle in Accra following a decision to close down retail shops owned by foreigners.

The Presidential Committee on Retail Trade under the Ministry of Trade and Industry decided to take on foreign-owned shops in Accra from today, August 13, 2020.

The taskforce undertaking the exercise says its action is in line with recommendations from the committee probing the impasse between Ghanaian traders and the foreign counterpart.

According to the retailers, the closure has become necessary following the refusal of the retailers to regularise their documents as directed by government.

But in a confrontation with the taskforce, some of the retailers stated that they had taken steps to regularise their documents.

“They haven’t given any reason why they are locking these shops. They said the Minister of Trade and Industry asked them to come there without a reason. Meanwhile, we’ve complied with all they’ve told us to do. Why would they lock the shops? Why can’t they verify if we’ve complied or not? Why are they only interested in locking the shops? They should check our documents,” he exclaimed.

“They gave us an assessment from the Immigration. We went there with them. Some people have submitted their documents to the Immigration. Customs didn’t ask us to do anything. All the institutions that have asked us to do something, we have complied. I don’t know why they are locking the shops. They were supposed to come today to check the compliance. When they came, they didn’t ask us any questions. They just started locking the shops,” he lamented.

Security officers aiding the taskforce have been compelled to use force as the foreign retailers continue to resist the closure of their shops.