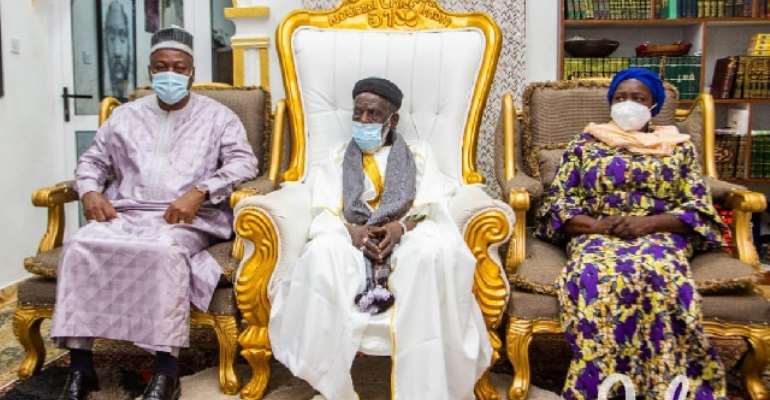 When given the nod as President in the 7 December election, former President and Flagbearer of the opposition National Democratic Congress (NDC), John Dramani Mahama has promised to continue and complete all the 200 Community Day Senior High Schools (E-blocks) he started in his first term and abandoned by the current government.

The former President explained that completion of the 200 E-blocks will ensure that the double-track system initiated by the current government will be completely scrapped.

Speaking at an event to introduce his running mate Professor Naana Jane Opoku-Agyemang to the National Chief Imam, Sheikh Osman Nuhu Sharubutu and the Muslim community on Wednesday, 12 August 2020 in Accra, Mr Mahama said: “One of the things we will do when we come back into office, and I know Inshallah we're coming back, is to complete the 200 community day schools we began so that we can bring a quick end the double-track system.”

He explained that his running mate is the best person to support him achieve that mandate because of her active involvement as Education Minister during his first term as President.

According to Mr Mahama, “she pioneered the community day schools”, adding that under her watch, “45 of them had been commissioned and had children studying in them and 73 of them were ready for teaching and learning to start” by the end of his four-year term.

He also emphasised his resolve to maintain the governing New Patriotic Party’s Free SHS policy and improve its quality.

“We will improve the free SHS so that the quality of education will become better,” he added.

The National Chief Imam prayed for Mr Mahama, Prof Opoku-Agyemang and the whole country by asking for peace and unity in Ghana during the December polls and beyond.

Mr Mahama and his entourage had earlier visited the Christian Council of Ghana, some church leaders at the Assemblies of God Church and the Christian community on the same day before his call on the Chief Imam.