US Elections: Trump Has Left US ‘In Tatters’ — Says Joe Biden And Kamala Harris 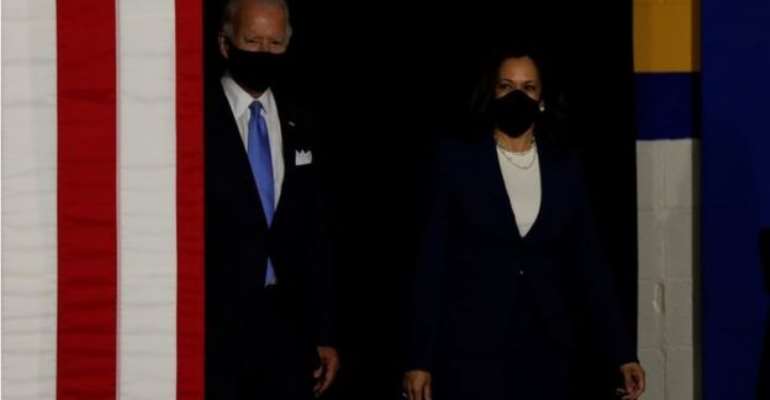 Democratic presidential candidate Joe Biden and his running mate Kamala Harris have attacked “whining” President Donald Trump as an incompetent leader who has left the US “in tatters”.

The pair held their first campaign event together, a day after Mr Biden unveiled Ms Harris as his number two.

President Trump hit back, saying Ms Harris had “dropped like a rock” in her own presidential bid.

What did Biden say?

Wednesday’s event in Wilmington, Delaware, was not open to the public, with Mr Biden, 77, citing coronavirus prevention needs. Both candidates walked on stage wearing masks to address a socially distanced group of masked journalists.

About 75 people gathered outside in a light rain before the event to catch a glimpse of the two candidates, according to Reuters news agency, although some of the crowd were critics of Mr Biden.

Speaking from the gymnasium of the Alexis I DuPont High School, Mr Biden noted that Ms Harris, a California senator, was the first woman of colour to serve as a presidential running mate for a major US party.

Mr Biden said: “The choice we make this November is going to decide the future of America for a very, very long time.”

He continued: “Donald Trump has already started his attacks, calling Kamala, quote, nasty, whining about how she is, quote, mean to his appointees.

“It’s not a surprise because whining is what Donald Trump does best, better than any president in American history.

“Is anybody surprised that Donald Trump has a problem with a strong woman or strong women across the board?”

He also attacked Mr Trump’s handling of the coronavirus pandemic, climate change, the unemployment rate and “his politics of racist rhetoric that appeals to division”.

What did Harris say?

Coming to the podium next, Ms Harris said: “I am ready to get to work.”

The 55-year-old former prosecutor told reporters: “This is a moment of real consequence for America. Everything we care about, our economy, our health, our children, the kind of country we live in, it’s all on the line.”

Ms Harris – the daughter of immigrants from India and Jamaica – continued: “America is crying out for leadership, yet we have a president who cares more about himself than the people who elected him.”

She continued: “He [Mr Trump] inherited the longest economic expansion in history from Barack Obama and Joe Biden.

“And then, like everything else he inherited, he ran it straight into the ground.”

Ms Harris added: “This is what happens when we elect a guy who just isn’t up to the job – our country ends up in tatters, and so does our reputation around the world.”