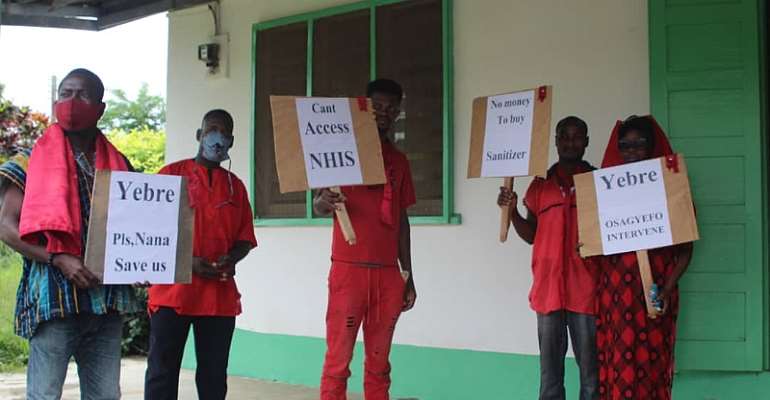 Staffs, both teaching and non-teaching of the University of Agriculture and Environmental Studies (UCAEs) are complaining about the delay in payment of salaries by the school's management.

According to the aggrieved staff, the school has failed to pay salaries over the last one year despite several appeal to management.

They stressed that the current situation has taken a toll on their livelihood as they even find it difficult to cater for their families.

Speaking to the media at the school's premises at Bunso on Wednesday morning, the staff has, however, appealed to the Patron of the school, Okyenhene Osagyefo Amoatia Ofori Panin and President Akufo-Addo to intervene in the current state of the University to avert any future possible close down.

"We now find it difficult to live without salary for a year as our families rely on us for their daily needs. We are not even having the equipment and materials to work with, and as you can see the environment is bushy" some grounds staff stressed.

They emphasised "We are begging Okyenhene to act fast before the University is closed down. We are also appealing to President Akufo-Addo to intervene in the matter as he is also a true son of the Akyem Abuakwa land".

However, the Student Representative Council (SRC) Secretary of the school, Gbefa Isabella, appealed to management to ensure teaching staff are paid to enable them return back to the classroom to teach students.

She blamed the management of the school for failing to address the issue at its earlier stage as it could help resolve the matter amicably without public notification.

She added, students, have paid their fees and expect to have the needed tuition they deserve.

"All that we are saying is that management should find a way of paying up lecturers so they can return back to the classroom to teach. As students, we have done our bit by paying our fees so we expect them to also fulfill theirs so that it does not affect us later on. We pay Ghc4,000.00 and deserve to get the tuition we require as students" Madam Gbefa Isabella said.

Management of the school is yet to respond to the issue.

The University was established by the Akyem Abuakwa Traditional Authority head by the Paramount Chief, Osagyefo Amoatia Ofori Panin to specialise in agriculture and environment, but it has not been in existence without challenges including non-payment of salaries.