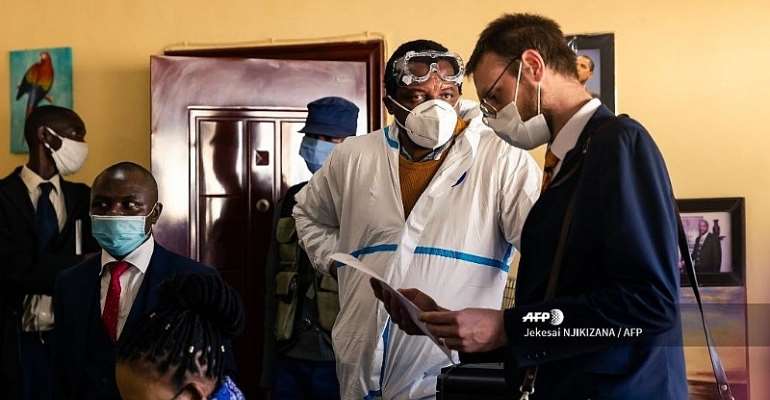 The bail hearing for Zimbabwean journalist Hopewell Chin'ono was moved to Thursday after the prosecutor called for the press and public to be prevented from attending the court session.

The court appearance began on a sour note on Wednesday as Chin'ono's lawyer Beatrice Mtetwa called for the prison services to take leg irons off of her client while he is in court.

Harare magistrate Ngoni Nduna upheld the state application to try Chin'ono in private tomorrow, even though his lawyer argued that his case is in the public interest.

Chin'ono will testify about the state of prison conditions, which the judge said would jeopardise prison security.

Chin'ono's lawyer Mtetwa says that he is surviving on biscuits and water because prison authorities will not allow him to receive homemade food, but he was able to get a visit from his sister.

Chin'ono was arrested on 20 July, as well as opposition leader Jacob Ngarivhume; both were charged with incitement to participate in public violence.

Ngarivhume, from the small Transform Zimbabwe party, had called for people to peacefully protest against the government on 31 August.

Ngarivhume's lawyer Donso Nkomo spoke to the press outside the courthouse, explaining that the whole process is difficult, especially because the government is not adhering to the law.

“We have had to wait for one hour on all occasions we have sought to visit them. When we do visit them, we are given very limited time to meet,” said Nkomo to reporters. “The constitution provides for private consultation between a lawyer and his client. That has not been given to us in respect to Jacob and Hopewell,” he added.

The Zimbabwe journalist's case has garnered a lot of media attention both in the country and internationally after he was arrested in his home after reporting that the then-health minister Obadiah Moyo had allegedly awarded a multi-million-dollar contract for Covid-19 supplies.

Moyo was later fired, but this report accentuated the ongoing alleged corruption within Zimbabwe.

Latest Photo Reports
Catch up with all the political quotes from our politicians.
Advertise here
More Europe
ModernGhana Links
20 years after Toulouse blast, workers and victims at odds over responsibility
Belgian artist Jan Fabre to face trial on charges of sexual harassment
Silent for once, Salah Abdeslam watches his brother, Brahim, blow himself up
One third of people in Paris region cancel or delay healthcare due to Covid crisis
EU steps up support for France over Australia submarine spat
One week to go before elections: German candidates clash over tax, minimum wage in close race
Nine works by Pablo Picasso donated to France by his daughter Maya
French fishermen protest, threaten to cut off Jersey's electricity
Greece moves asylum seekers to newly built camp derided as 'prison'
TOP STORIES