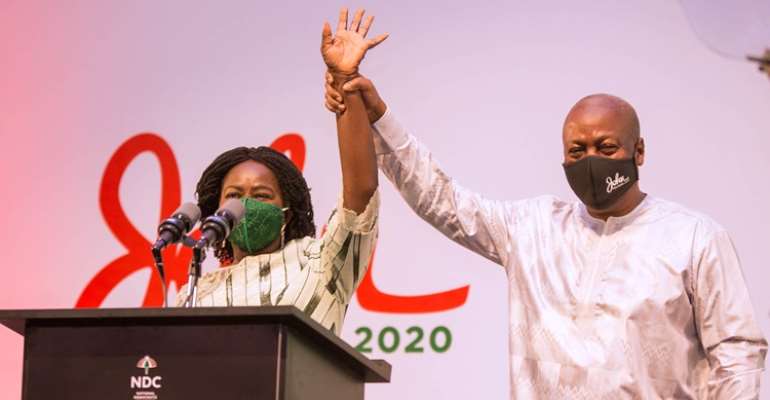 Former President John Dramani Mahama says he together with his running mate, Professor Jane Naana Opoku Agyemang will not engage in politics of insults ahead of the 2020 elections.

According to him, the team is not perturbed by the numerous attacks and insults hurled at him and his running mate from other political parties.

Speaking at a ceremony to introduce the running mate of the party to the leadership of the Christian Council, John Mahama said name-calling will not be part of his campaign.

“My running mate, Prof. Naana Jane Opoku-Agyemang, whom I am presenting to you today, has been encouraged by the Osu Mantse to be strong and courageous in the face of, what he feared would be, a barrage of insults and attacks on her person, just because she has decided to serve her country at the highest level, help shape its destiny and ensure shared prosperity for all. Indeed, these unprovoked attacks and insults have already started. But I can assure you and all Ghanaians that Naana Jane and myself will never engage in insults and name-calling of opponents. Children are watching, listening and copying and it is important we serve as good role models.”

John Mahama added that all projects started under the Nana Akufo Addo administration will be continued if the National Democratic Congress (NDC) wins power come December 7.

He accused the Akufo-Addo government of abandoning projects started under his administration and targeting businesses owned by people perceived to be supporters of the opposition.

“I'll complete the 200 Community Day SHSs that we began and many other projects that the current government has abandoned… Our party will change course from the despicable, destructive, and unprincipled kind of politics we are currently witnessing. There is so much work to do and so much to build. We cannot succeed if we abandon projects funded by tax-payers’ money just because our opponents began them. We cannot succeed if we target and destroy the businesses of people perceived to be in support of an opposition party, causing families to lose their livelihoods. We cannot succeed if instead of uniting our different people we promote intolerance and division,” he said.