Fighting on the beaches: Mauritius rallies after oil spill 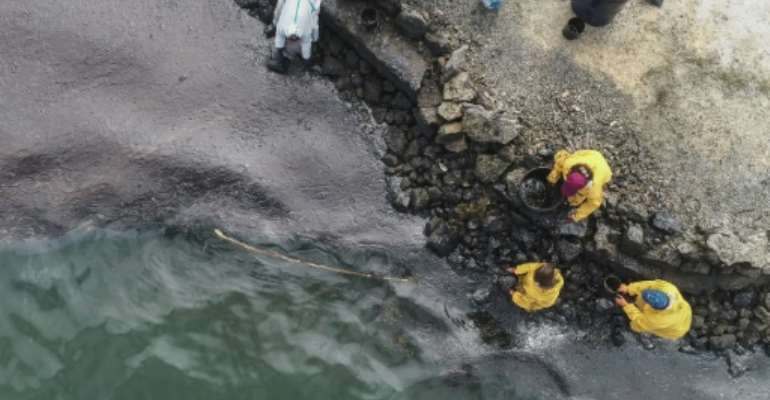 The stench of oil from the grounded ship was overwhelming and Vikash Tatayah's eyes stung as he mopped up the sludge lapping the unspoiled Mauritian shoreline that he has spent his life protecting.

"It was uncomfortable to breathe," Tatayah, director for the Mauritian Wildlife Foundation, told AFP of the devastating scene at Ile aux Aigrettes -- a wildlife haven lying in the direct path of a oil spill that has struck the island's southeast.

"Your eyes burned up, people were getting dry skin and lips. It was difficult of course because we had the stench of petroleum in the air, but we just got on with it."

The Indian Ocean archipelago is confronting its greatest-ever ecological disaster after a huge cargo ship ran aground off its coast on July 25.

Last week, it began leaking its fuel into picture-postcard seas.

More than 1,000 tonnes has spilled from the MV Wakashio, a Japanese-owned cargo ship, befouling the coral reefs, lagoons and mangrove forests that sustain Mauritius' global reputation as an ecotourism hub.

"The seafarers' relationship with this coast is so deep that it's a tragedy. I've seen people from every town in Mauritius with tears in their eyes," said David Sauvage, an activist with the Rezistans ek Alternativ environment group.

In the days following the spill, salvage crews battled poor weather and dangerous conditions to extract the remaining 4,000 tonnes of fuel from the ship before it splits in two.

Prime Minister Pravind Jugnauth on Thursday announced that all the fuel left in the tanks had been pumped out, although about 100 tonnes more was still elsewhere aboard the ship.

The Japanese-owned bulk carrier, pictured here at an undisclosed location on May 15, ran aground on one of the world's most acclaimed marine coasts. By Handout (NAGASHIKI SHIPPING CO./AFP)

Thousands of Mauritians have sprung into action, marshalling along the shoreline day after day to fight the advancing tide polluting their land, their health and their livelihoods.

Volunteers have ignored government orders to stay away, and have dived headfirst into a major clean-up effort to save the immaculate coastline at the bedrock of the Mauritian economy.

Kilometres (miles) of floating plastic barriers stuffed with straw and fixed with empty bottles have been stitched together into chains and placed at sea in an effort to hold back the oily tide.

"We stayed up all night to make this," said Sauvage of the improvised "booms" stitched by hand by volunteers squatted in the sand.

Mauritians clad in gumboots and rubber gloves, coated head-to-toe in treacly sludge, have scrubbed the shore, where in the distance the leaking ship tilts perilously on its axis.

Human hair has been woven into nets to absorb the oil, with barbers offering free cuts at the shore to those donating their locks.

Salons have collected their cuttings while a French NGO has promised to contribute 20 tonnes of hair to the cause.

"We are fighting on the beaches, we are fighting with all the resources we have as citizens," local MP Joanna Berenger, who cut her own hair in solidarity, told AFP, adding that one kilogram (2.2 pounds) of hair could absorb eight litres of oil (2.1 US gallons).

"Today we are fighting as one people and one nation... We are witnessing the birth of new Mauritian spirit."

After the spill Tatayah raced to Ile aux Aigrettes, a protected wildlife sanctuary off the coast.

A fisherman places a hand-made oil barrier into the sea at the Old Grand Port. By Laura Morosoli (AFP)

His team had little protective gear early on, but could not risk delay.

"There was so much of it coming down that it was pointless trying to mop small patches. It was everywhere. We were right in the middle of it," he said.

There was a lot at stake.

Conservationists managed to evacuate a number of indigenous birds and plants -- "the rarest of the rare" -- but not all: a dead native green heron was found coated in black tar.

Fishermen and skippers tend to a pump that has been pressed into service to extract the oil. By - (AFP)

"This is 36 years, 40 years of our lives. So we're pretty upset about it... We pride ourselves in our work. It becomes part of our DNA," he said.

There is anger too, as the stricken boat threatens to split in two and unleash a second disastrous spill.

Many want to know why more wasn't done to anticipate this disaster.

"This government should have asked for help since day one," said Berenger.