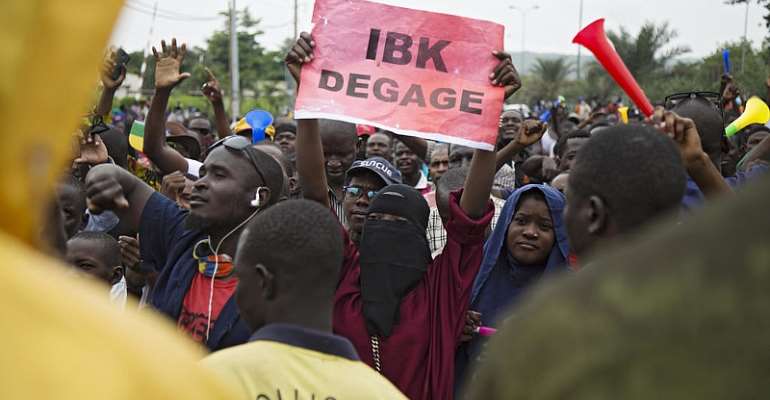 Security forces in Mali fired tear gas against protesters in Bamako on Wednesday, in an attempt to try and disperse people who had camped overnight as part of a demonstration urging the president's resignation.

Around 1,000 people stayed on the streets until Wednesday morning when they were dispersed by Malian security forces.

Demonstrators erected tents, others unfurled mats and duvets on the floor, while many of the leaders were seen seated on chairs.

The demonstrations was smaller than those before the truce announced by the opposition M5-RFP group, the 5 June Movement – Rally of Patriotic Forces (M5-RFP), a coalition of civil society and opposition groups.

Despite poor weather on Tuesday afternoon, protesters turned out to restart their calls for President Ibrahim Boubacar Keita (IBK) to step down, according to Bamako correspondent Coralie Pierret.

The opposition to Keita had declared a truce following mediation led by the Ecowas regional bloc so that people could celebrate Eid al-Adha.

New constitutional court judges were sworn-in on Monday, a key part of a plan by Ecowas mediation led by Nigeria's former President Goodluck Jonathan to try and solve the ongoing political crisis.

Demonstrations in Mali had erupted over the country's contentious elections and a move by the constitutional court to dismiss several MPs. The protest movement has channeled a broad range of concerns including perceived government corruption and ongoing insecurity in the country.

“The recent violence that rocked the capital left a terrible toll of dead and wounded in its wake,” said Corinne Dufka, Sahel director at Human Rights Watch, a New York-based rights watchdog.

“Malian security forces should ensure that they respond to violent protests with minimum force, while political parties should impose restraint on their members,” Dufka added.

Authorities in Bamako deployed the country's Antiterrorist Special Forces (FORSAT) in response to the demonstrations, while some protesters erected roadblocks and attacked public buildings.