By Tamsin Bradley - The Conversation 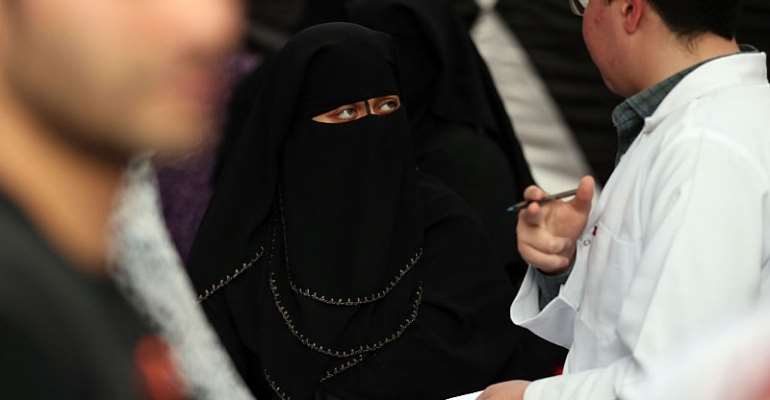 An Egyptian doctor gives medical advice to a woman about female genital mutilation during an awareness campaign in Giza, outside the capital Cairo. - Source: Mohamed El-Sahed/AFP via Getty Images

Sudan's transitional government recently announced a nationwide ban on female genital mutilation. A 2014 survey backed by the United Nations estimated 87% of Sudanese women and girls between the ages of 15 and 49 had been subjected to the practice. Most undergo an extreme form known as infibulation. Tamsin Bradley sets out the context in which the ban was announced and the prospects for change under the reformist government.

How widespread is female genital mutilation in Sudan?

Female genital mutilation, or cutting, is widespread in Sudan. The practice is also common in Egypt, Somalia and among some groups in the Arabian Peninsula (Oman, United Arab Emirates, Yemen), Iraq and occupied Palestinian territories. It is not common in Bahrain.

The reasons for the practice are the same in all the countries. Most respondents in social studies indicate reasons such as to maintain cleanliness, increase a girl's chances of marriage, protect her virginity, discourage “female promiscuity” thus preserving the family honour, improve fertility and prevent stillbirth. Also, femininity is thought to be enhanced through the removal of “masculine” parts such as the clitoris, or in the case of infibulation , to achieve smoothness considered to be beautiful.

Religious reasons are often mentioned and are sometimes misused by groups in favour of the practice to sustain it. Religious leaders in Sudan have yet to put out a common statement, one of the factors that's hindering efforts to abandon the practice.

What are its most evident effects on women and girls?

These are multiple – medically as well as in terms of denying basic human rights.

Female genital mutilation causes long term and serious health problems. This includes making menstruation and childbirth highly risky, painful and ultimately life threatening. If performed outside a medical setting and in unsanitary conditions the practice can cause immediate infection that is painful and long-lasting. Girls are known to have died as a direct result of being cut.

Female genital mutilation operates to maintain girls as objects of control. It denies girls and women autonomy over their own bodies and over life decisions in a broader sense.

What is the significance of this ban?

The ban is the result of decades of campaigning. It is evidence of the influence of global, national and local activism that has finally exerted pressure on state governments to enforce the ban. It is also an indication that attitudes are beginning to shift. But there is no room for complacency.

Sudan operates as a federal system. This means that states are allowed to have their own legislation and formulate their own child laws. The first law banning it was passed in the state of South Kordofan in 2008. This was followed by Gadaref state in 2009. Both states ratified a Child Act with an article banning female genital mutilation.

The challenge was achieving countrywide ratification, which has now happened through the passing of the law by the sovereign council.

But the law alone won't reduce female genital mutilation. It will have to be supported by highly visible public health and human rights messaging at every level, most critically at the grassroots.

What we have learnt from those early states is that giving effect to a ban requires concerted effort. Additional steps that have been taken include media campaigns at federal, state and community levels. This has included using radio programmes with messages from key informants and leaders, songs and role-plays to encourage abandonment of the practice.

Media campaigns have worked alongside the powerful national “Saleema” campaign. Saleema, which means “whole girl” in Arabic, is a UN-funded social movement designed to emphasise that an empowered, successful girl is uncut. Saleema has facilitated the work of many legislators and activists. It is seen to have contributed significantly to raising the visibility of female genital mutilation and reformulating it as a violation and major health risk rather than a cultural matter.

A similar law was passed in Egypt but didn't stop the practice. What are the prospects in Sudan?

It's important not to assume that approaches to end female genital mutilation work across contexts. For example, political and economic factors can play a large role.

In the case of Sudan, the country has received donor funding targeted at ending the practice for a number of years. This has helped to build the capacity of activists to push for change. This funding is continuing and will build on the earlier successes.

But a ban can only work if there's on the ground coordination and commitment at multiple levels. Government must work with donors and implementers. More importantly than anything, change has to be driven by the grassroots. Community activists are key change agents and it is their drive and energy that determines the likely success. Change, even with a new law, will be slow in contexts where activism is not encouraged and civil society is curtailed.

Another reason for hope in Sudan is the country is going through political change. This could open up civil spaces and support the voices of young women and girls who do not want to be cut.

Tamsin Bradley does not work for, consult, own shares in or receive funding from any company or organisation that would benefit from this article, and has disclosed no relevant affiliations beyond their academic appointment.

Latest Photo Reports
Catch up with all the political quotes from our politicians.
Advertise here
More Article
ModernGhana Links
Vandal Nathan Writes: Adios To Bacchus
The worship of God is the beginning of ignorance?
Energy transitions: The role of institutions and market structures
Accountants can reduce the environmental impact of mining: pointers for South Africa
How multicultural churches in South Africa are breaking down race barriers
Nigerians refer to violence as 'intergroup conflict': what's actually at play is xenophobia
The making -- and then breaking -- of South Africa's Robben Island Museum
Isaac Adongo writes: Under Akufo-Addo the average man's hand goes towards the mouth to drive away flies, not to put food into the mouth
My early memories of the Kumasi Academy Class of 1976
TOP STORIES

MMDCE appointments shouldn't be seen as job for the boys' - ...
18 minutes ago