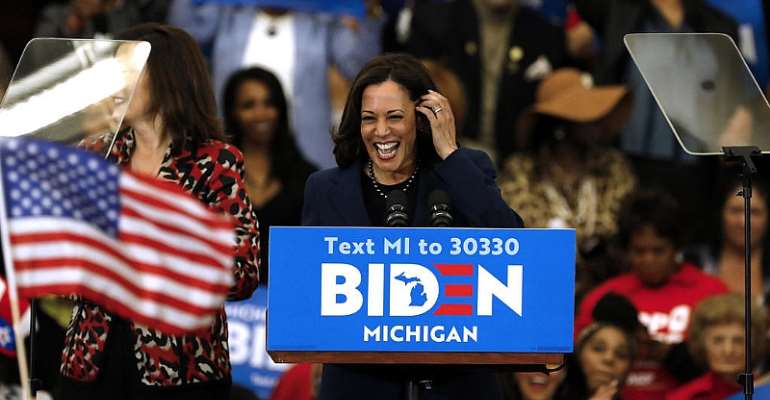 US Senator Kamala Harris made history on Tuesday by becoming the first woman of colour to be nominated for national office by a major political party. Harris, of Indian and Jamaican origin, was chosen by former vice president Joe Biden to be his running mate for the November election at a time when America is grappling with its racial past.

Biden ended weeks of speculation about his choice on Tuesday, thus making Harris the first Black woman and Asian-American ever to run on a US presidential ticket.

Her selection came as little surprise. With the United States in the midst of a national reckoning on race sparked by the police killing of George Floyd, Biden has been under pressure to choose a woman of colour.

Though Biden and Harris clashed during the Democratic presidential debates before she dropped out of the race last year, Harris had become a strong supporter of his candidacy and a voice of authority on issues of racial justice.

Among Democrats, it was hailed as a triumph, with former President Barack Obama tweeting that Biden had "nailed this decision" and that Harris "is more than prepared for the job."

Inspiring story
Harris, 55, is among the most prominent Black women in American politics, with appeal across the Democratic party's ideological spectrum.

The daughter of Indian and Jamaican immigrants, she served six years as the attorney general of California before becoming only the second Black woman ever elected to the Senate in 2016.

Throughout her rise, Harris has excited Democrats and Black voters with a personal story that many find inspiring.

Indian-American actress Mindy Kaling said in a tweet that Harris' appointment was an "exciting day" for Black and Indian women, many of whom had grown up thinking they could never hold positions of high office.

Role of Black women
Black women were critical of Biden's success in the Democratic primary, lifting him to victory in South Carolina after series of stinging losses.

Similarly, Harris --described by Biden as a "fearless fighter for the little guy"-- is expected to help bolster his chances of beating Donald Trump in the November election.

Still, Harris was far from a shoo-in for the role of running mate.

During the primary, she struggled to reconcile her prosecutorial record with her support for criminal justice reform, facing criticism from progressives who doubted her evolution on the issue.

Biden's advisers and even his wife Jill also harbored reservations about her because of the ambush she mounted on Biden during a Democratic debate over his long-ago stance on mandatory busing for public school students, which she said undermined integration.

Trump said Tuesday, Harris had been "very, very nasty" to Biden during the primaries and that he was "surprised" that Biden had picked somebody so "disrespectful".

Burying the hatchet
The Democratic presidential candidate told reporters in August he had put the debate fracas behind him. “I don't hold grudges,” he said.

He considered at least five Black women for the job of running mate, including Susan Rice, who served as the national security adviser under President Barack Obama.

For American professor and author Célia Belin, Biden chose Harris because she shares his world view.

"She is not an activist nor overly progressive like Elizabeth Warren was, she is more flexible and corresponds to what Biden is hoping to achieve during his presidency," Belin told RFI.

The two are expected to hold their first event together on Wednesday, in Biden's hometown of Wilmington, Delaware.

Only two women have previously been nominated for the vice presidency of a major political party and neither was successful: Sarah Palin, the governor of Alaska, in 2008, and the congresswoman Geraldine Ferraro in 1984.