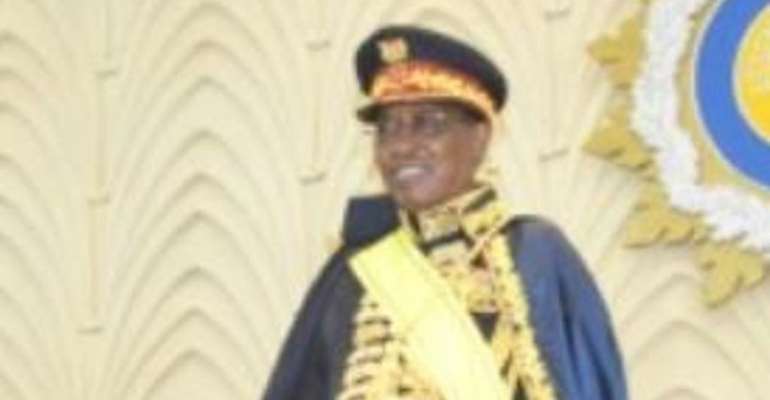 Clad in an elaborate black military coat, heavy with gold braid denoting his new rank, Chadian President Idriss Deby was awarded the rank of marshal on Tuesday as part of the festivities of Chad's 60th anniversary of independence.

Deby, 68, is the first person to be awarded this title, after he successfully thwarted jihadists in April after a humiliating loss of troops. Deby, who seized power in 1990 from Hissene Habré, has ruled continually since then.

The National Assembly, where his Patriotic Salvation Movement (MPS) party is in majority, bestowed this honour on him.

“You are an icon and a symbol for Chad,” said Haroun Kabadi, assembly speaker.

Speaking to RFI about this symbolic move, MPS spokesman Jean-Bernard Padaré said of Deby, “We are proud of your commitment to ensure the integrity of our territory and the defense of our fellow citizens.”

The President used the ceremony to speak about the April offensive, after Boko Haram killed some 100 troops in March in Bohoma, in the western part of the country, where Lake Chad is located.

“The threat of terrorism is still there, and it is ruthless,” he said, adding, “the fight against terrorism is a vital imperative and will remain at the core of our concerns.”

Chad is part of the G5 Sahel group that was formed to fight terrorism with Burkina Faso, Mali, Mauritania and Niger and is backed by France, Germany, and the European Union.

As part of the 60th anniversary ceremony, Deby released 538 prisoners, including General Abdelkader Baba Ladde, a Chadian rebel who was arrested in the Central African Republic by the United Nations in 2014. He had been sentenced to eight years in prison last December for rape, illegal possession of weapons, arson, and criminal association.