Would Candidate Mahama Remain Silent for President Akufo-Addo to Govern in Peace? 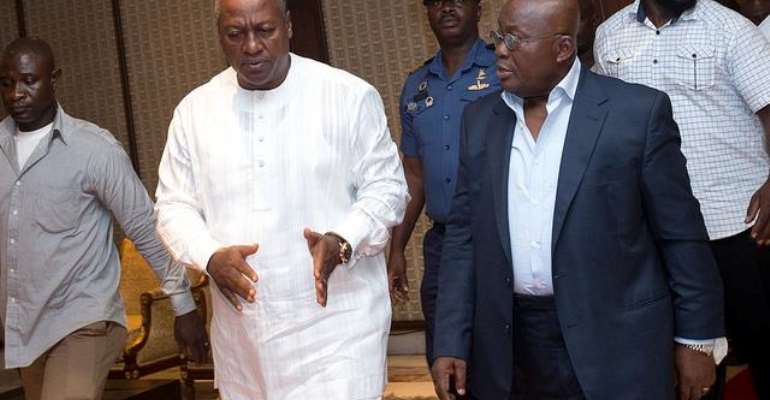 For a key player among the leadership of a political party that undertook the ethnic cleansing of Ghana’s judicial system to be brazenly pontificating about a Ghana that was supposedly more peaceful than Ghana under the tenure of President Addo Dankwa Akufo-Addo, makes one wonder whether Candidate John Dramani Mahama has stopped taking his psychotropic prescription drugs of late (See “Akufo-Addo Is Undermining Ghana’s Peace, Freedom with Fear, Intimidation and Threat of Death – Mahama” Modernghana.com 8/9/20).

It is a darn shame and a pity that Candidate Mahama seems to have so soon and easily forgotten that not very long ago, the former Rawlings-appointed Communications Minister stood in the heart of the Volta Region and haughtily declared that no political party in Ghana’s postcolonial history could be counted upon to be more effective in the deadly and strategic application of wanton violence for the achievement of political ends.

Which is why the Bole-Bamboi native needs to do Ghanaians and himself great favor by promptly checking in with his shrink or psychiatrist in order to resume taking his prescription medication once again. Candidate Mahama may also be hoping that Ghanaians have so soon forgotten the fact that the criminal masterminds in the Kumasi kidnapping of the three young, white Canadian NGO women volunteers were all, each and every one of them, smack in the pay of the Mahama-led National Democratic Congress (NDC).

We all know, for instance, that the leader and prime suspect of the kidnappers, as forensically identified by members of the Ghana Police Service, is Mr. Samuel Ofosu-Ampofo, the National Chairman of the Mahama-led main opposition National Democratic Congress, who is also a former Member of Ghana’s Parliament and a Mahama cabinet appointee. This is the sort of peace that Candidate Mahama has been promoting in the country since he was seismically jackbooted out of Jubilee House in the 2016 Presidential Election by more than One-Million Ghanaian voters.

The former Atta-Mills’ Arch-Lieutenant may also have so soon and conveniently forgotten that as Mr. Rawlings’ Communications Minister, Mr. Mahama achieved remarkable infamy as a “Shit-Bomber,” the cabinet operative in charge of literally flooding the compounds and premises of media establishments whose reporters and correspondents were widely known to be critical of the regime of the National Democratic Congress with raw or untreated human waste. It is also worth highlighting the fact that the overwhelming majority of incidents of politically motivated violence that have occurred in the country have been instigated or engineered by the leaders of the Nation Democratic Congress, foremost among them Messrs. Mahama, Johnson Asiedu-Nketia and Samuel “Sammy” Gyamfi, the so-called National Communications Officer of the National Democratic Congress.

Even as I write, the National Chairman of the National Democratic Congress, as already indicated above, is court being tried for masterminding both the Kumasi Kidnapping and other violent and criminal activities aimed at systematically and seditiously destabilizing the peace and quiet of the country by undertaking terroristic activities across the country. This is the kind of peacefulness that Ghana’s main opposition leader, Mr. John Dramani Mahama, has been promoting in the country literally around the clock. We must also highlight the incontrovertible fact that the four-and-half years of the Mahama regime was characterized by political killings or assassinations than at any other temporally identical period in the history of Ghana’s Fourth Republican dispensation.

What of the brutal bedroom stabbing of Mr. JB Danquah-Adu, the Akufo-Addo cousin and extant New Patriotic Party Member of Parliament for Akyem-Abuakwa North? What of the point-blank rubout of Mr. Peter Kenyenso, extant District Chief Executive (DCE) of Nkwanta-South, presently a municipality in the newly Akufo-Addo-created Oti Region? Mr. Kenyenso, it is significant to note, was personally handpicked by the then-President John Dramani Mahama. But even as the Kenyenso family had occasion to bitterly lament and complain at the time of the slaying of their kinsman, a state-side President Mahama never bothered to spend even a whistle-stop moment at Mr. Kenyenso’s funeral and burial. That is just how vigorously Candidate Mahama has been promoting peace and tranquility in the country.

Now, let Candidate Mahama try lecturing the families of Messrs. Danquah-Adu and Kenyenso – there were other political killings at Kumasi-Asawase and North-Kaneshi, both involving the then-opposition New Patriotic Party’s operatives – and then the barbaric acid-slaying of Mr. Adams Mahama, at the time of his assassination, the Upper-East Regional Chairman of the New Patriotic Party and report back the response or reaction that Little Dramani gets met with. There is absolutely no question about the glaring fact that the infamous hearty celebrant of the “mysterious” death of President John Evans Atta-Mills is national security risk.

Ablakwa making noise about Akufo-Addo’s flights for politica...
25 minutes ago