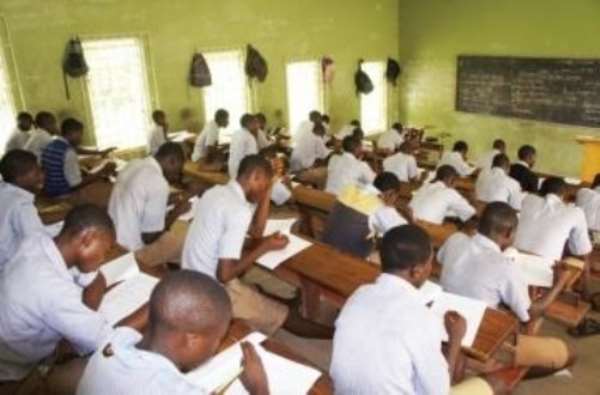 We see the rampant and riotously high spate of violence in examination halls of our senior high schools across the country because, like the infamous Kumasi kidnapping of the three young Canadian white NGO volunteer women, it is part of the political game plan of a desperate megalomaniacal Candidate John Dramani Mahama and the rest of the hoodlum pack of the leadership of Ghana’s main “revolutionary” opposition National Democratic Congress (NDC).

We saw this sort and level of indiscipline play out, not long ago, in the Upper-East Region, when Mr. Stephen Atubiga, the Deputy General-Secretary of the NDC, was dispatched to several senior high schools in the wake of the landmark Akufo-Addo-implemented fee-free Senior High School Policy Initiative, to criminally incite some boarding students against the sharp upsurge in the intake of students. Mr. Atubiga would also incite the students to riot against what the instigator termed as the poor quality of food provided, gratis, to these boarding students by the State.

Well, in the latest of such Mahama-instigated anti-SHS campaign, we learn that some 14 SHS final-year students sitting for their exit examinations went on the rampage that resulted in the destruction of several thousands of cedis worth of state-owned property, because the invigilators supervising their exams would not passively look on while some of the underprepared students cheated on their exams (See “Nation Awaits Education Minister and GES Boss after Akufo-Addo’s Clemency” The Herald / Ghanaweb.com 8/10/20).

As has traditionally been the case, the Director-General of the Ghana Education Service (GES), Prof. Kwasi Opoku-Amankwa, and the Minister of Education, Dr. Matthew Opoku-Prempeh, ordered the immediate dismissal of these vandals. Interestingly and significantly enough, an order reportedly came from the Presidency pleading with the top officials of our public-education sector that the culprits be afforded a reprieve or clemency and be allowed to complete taking their exit exams.

I, personally, find this countermanding order from the Presidency to be both very interesting and instructive for several reasons. First of all, the order wisely and opportunely prevents Messrs. Opoku-Amankwa and Opoku-Prempeh from cheaply and facilely playing into the devious hands of their political detractors, namely, Candidates John Dramani Mahama and Naana Jane Opoku-Agyemang, the two most scandalous figures in the field of the development of Ghana’s public education.

Under the watch of these two infamous politicians and their associates among the vanguard ranks of the National Democratic Congress, Ghana’s public education was ranked as the worst in the civilized world by the United States-sponsored and Paris-based Organization for Economic Cooperation and Development (OECD). More straight to the point, Ghana was ranked 145th out of the 145 countries whose public education systems were evaluated by the OECD. That was about 7 years ago, when President John Evans Atta-Mills, late, and the then Vice-President John Dramani Mahama ran the affairs of our beloved country.

Secondly, it is about time, actually long past time, that Ghanaian leaders and politicians and education experts found innovative and constructive ways of disciplining egregious student misbehavior at all levels of our public education system – that is, from Pre-K to the tertiary level – without having to inadvisably having to destroy the very purpose which they professionally and politically claim to represent. This writing may be coming very late in time, but it is, nevertheless, worth underscoring the fact that unruly and crassly undisciplined students can be effectively punished without turning these youthful and, for the most part, minor culprits into vindictive nation-wrecking rebels and political hijackers like the gang of thugs who composed the germ or base of the erstwhile Jerry John Rawlings-led mutineers and executioners of the erstwhile Armed Forces Revolutionary Council (AFRC), who also kickstarted the infamous Rawlings-led junta of the erstwhile Provisional National Defense Council (PNDC) and the present kleptocratic and faux-socialist political juggernaut that is the Rawlings-founded and chaperoned National Democratic Congress.

It goes without saying that this is not the very first time that such sinisterly and deliberately orchestrated incidents of violence are occurring in the country. And most likely, they are highly unlikely to be the last. To be certain, such wanton incidents of violence are as rampant and old as the very foundations of the establishment of the public-school system in the country. Now, what needs to “constructively” happen here is for the culprits and their parents and guardians to be billed or surcharged with the value of all properties so damaged and/or destroyed and, possibly, punitive surcharges as well.

Even more effectively, these criminal offenders could be assigned to the performance of various community service programs, as a means of teaching them real, positive life experiences as well as making them learn to become productive members of Ghanaian society. As for the question of the predictable anger of the grossly incompetent leaders of the National Democratic Congress over the “christening” of these final-year SHS students as “Akufo-Addo Graduates,” it is a well-deserved accolade about which the Mahama Posse can do absolutely nothing about. Nobody prevented these NDC moral reprobates and political scam-artists, common thieves and unconscionable nation-wreckers from making themselves and their party relevant and a positive force to reckon with vis-à-vis the progress and development of Ghanaian society.

The NDC’s leaders are veritable losers who chose the criminal and wanton exploitation of Ghanaian voters and the citizenry above all else. And they deserve to languish in opposition for as long as it will take to lift our country out of the stygian morass of inexcusable underdevelopment into which Ghana has been plunged by these Cash-and-Carry Social Darwinian scammers. God Bless Our Homeland Ghana and empower us to fearlessly resist the political specter of the Mahama Posse.

I lied that you contracted covid-19, you didn’t also chop co...
43 minutes ago