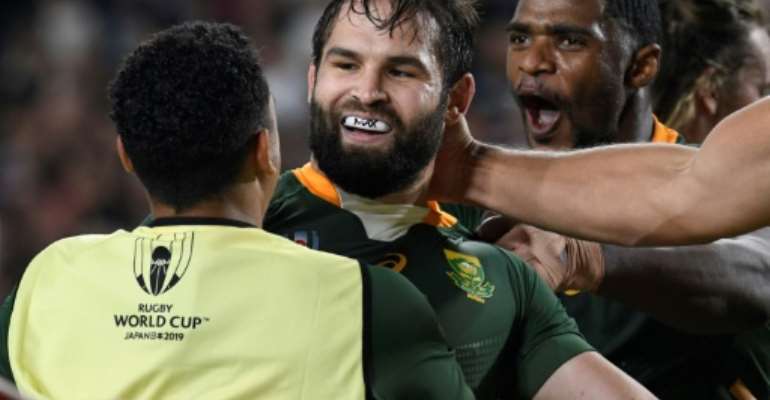 Cobus Reinach has scored six tries in 14 Tests since his South Africa debut in 2014. By Filippo MONTEFORTE (AFP/File)

Reinach, 30, who has joined the French club on a three-year deal, was behind Faf de Klerk in the pecking order as the Boks lifted the Webb Ellis trophy last November.

The ex-Northampton Saints number nine said he aims to catch the attention of Springboks head coach Jacques Nienaber and director of rugby Rassie Erasmus by playing alongside Pollard.

"I don't know what their plans are but I'm planning to bring my best. If they want that they can certainly have that. The partnership with 'Polly' would go a long way in that," Reinach told AFP.

"The only thing I can do is put my best food forward and keep chasing growth and then if they want to pick me I can show them I can perform at that level," he added.

The Top 14 side have appointed ex-France international and head coach Philippe Saint-Andre as director of rugby with the aim of losing their reputation as a foreigner-filled squad established under previous directors Jake White and Vern Cotter.

Reinach praised Saint-Andre as the former Sharks boss has aided him in settling in due to the language barrier.

"It has definitely been a help. There are sometimes when the coaches talk and I find it hard to understand so he comes in and helps a lot," he said.

"We have a very good environment at the moment, everybody wants to help each other and go forward. It's been really top notch and I love working with them," he added.

The Top 14 season is set to start on September 4 with Reinach's new side hosting Pau a day later.

However the Grey College graduate is eyeing facing the British and Irish Lions at the end of the campaign after witnessing the 2009 tour as a member of the Sharks academy and missing almost four years of Test rugby due to injury and leaving South Africa for England.

"That is a huge target, but the bigger target is the next international game. I want to keep my form and rugby at the best I can. If they want that and need that I'm available," he said.

"It was unbelievable. It's 12 years later but you do want to play and be a part of such a special environment and competition with that," he added after week-long training camp in the Pyrenees.

On Monday, Stade Francais announced they had stopped training and put their squad and coaching staff into isolation until August 17 after they reported positive coronavirus cases last Thursday.

On Tuesday Montpellier also stopped training after a partner of one of the team's players tested positive for the virus.

"As players we don't know what's happening or what's going on. We just have to keep ourselves healthy and hopefully we can train hard," he said.