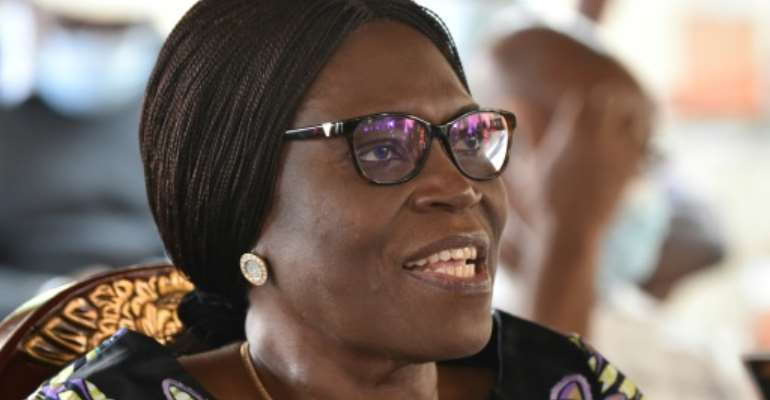 Simone Gbagbo was released from prison two years ago. By SIA KAMBOU (AFP)

The former first lady and her husband Laurent Gbagbo were both charged over violence that killed some 3,000 people in 2010-2011 after Gbagbo refused to cede power to Ouattara following his electoral defeat.

While she was jailed by Ivorian judges and later amnestied, her husband was transferred to the International Criminal Court (ICC) where he was eventually acquitted last year.

"I would like to appeal to the head of state to grant amnesty to make Laurent Gbagbo eligible," for the forthcoming election, said Simone Gbagbo in her first press conference since her release from prison two years ago.

"Whether Laurent Gbagbo contests the presidential election or not, he should be eligible," she said, asking Ouattara to give her husband a diplomatic passport, saying it was his right.

She said such a move would "facilitate reconciliation" in the country, a former regional economic powerhouse that was rocked for a decade by a low-level civil war and political violence.

Laurent Gbagbo, the first head of state to stand trial in The Hague, was freed conditionally by the ICC and has already applied for a passport.

Belgium agreed to host Gbagbo after he was released under strict conditions, including his return to court for a prosecution appeal against his acquittal. An ICC spokesman has said Gbagbo can travel provided the destination agrees to receive him.

Gbagbo has not said clearly if he will contest the October 31 election. His Ivorian Popular Front (FPI) has split into factions and his estranged former prime minister Pascal Affi N'Guessan has already announced his candidacy.

The vote has been turned on its head by the sudden death of prime minister Amadou Gon Coulibaly -- seen as Ouattara's anointed successor -- from a heart attack in July.

Ouattara then threw his hat into the ring citing "a case of force majeure" after the death of his ruling RHDP party's candidate "left a void".

But a new constitution was adopted in 2016, which Ouattara and his supporters argue reset the clock, allowing him to run again -- an interpretation strongly contested by the opposition.

A youth opposition grouping close to Gbagbo's party said they would demonstrate on Thursday against Ouattara's candidacy.