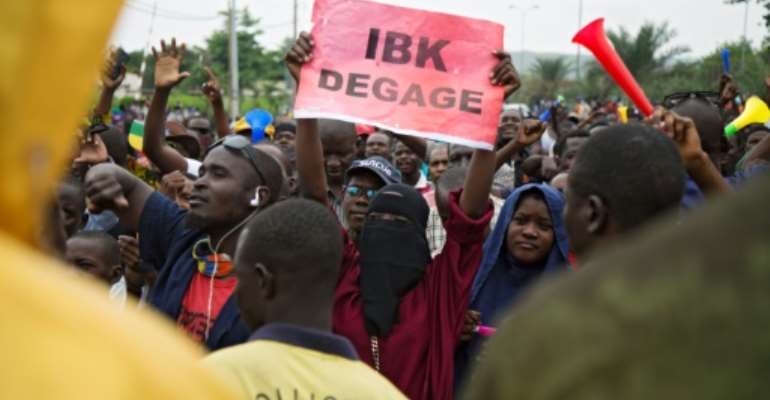 The protest on Tuesday was the first staged by the June 5 Movement since July 21. By ANNIE RISEMBERG (AFP)

Malians took to the streets in the capital Bamako on Tuesday, despite rainfall and pleas from mediators to stay home, to demand the resignation of President Ibrahim Boubacar Keita.

"We want real change in Mali, IBK get out," read one banner, using the acronym by which Keita is known.

Other people carried umbrellas against the rain and toted signs, also calling for the prime minister's resignation.

After the crowd sang the national anthem, prominent opposition leader Choguel Maiga said: "We will continue our fight until the end of IBK and of his regime."

Mahmoud Dicko, a Saudi-trained imam viewed as the opposition's figurehead, told protesters: "This combat is to restore the Malian nation".

"If IBK doesn't listen to us, he will see. I swear before God that he will see. But if we don't rush, we will win this victory," he said.

The gathering marks the first time the June 5 Movement has staged a protest since July 21, when the opposition group declared a temporary truce in a months-long push to topple Keita.

It staged the demonstration despite a call to stay home from Nigeria's ex-president, Goodluck Jonathan, a mediator for the Economic Community of West African States (ECOWAS) in Mali's crisis.

Mali's political impasse has struck fear into the poor Sahel state's neighbours and allies, who are keen to prevent it from sliding into chaos.

The June 5 Movement -- so called after the date of its first protest -- has been channelling deep anger over a dire economy, perceived government corruption and Mali's eight-year jihadist conflict.

But tensions snowballed into crisis last month when 11 people died during three days of unrest following an anti-Keita protest, in the worst political strife the country has seen in years.

The 15-nation ECOWAS bloc stepped in to mediate. On July 27, the bloc's heads of government stuck by Keita, but proposed the formation of a new unity government, among other measures.

The June 5 Movement has rejected the proposals, however.

Nigeria's ex-president Jonathan, who had already led a mediation mission to Mali in mid-July, made a surprise return to Bamako on Monday, when he met the president and opposition figures.

Still, there is little indication that the impasse can be overcome, as anti-Keita protests have gone ahead despite Jonathan's admonitions.

Dicko, addressing protesters on Tuesday, said that it was time for Malians to talk among themselves.

"Even if we don't like the way they did it, we thank ECOWAS for its gesture," the influential imam said.

Keita, who first came to power in 2013, has meanwhile attempted to follow the ECOWAS recommendations.

He swore in nine new judges to the Constitutional Court on Monday, which formed part of ECOWAS efforts to resolve an election dispute that has contributed to the crisis.

Much of Mali's current tension was sparked in April, when the Constitutional Court threw out 30 results from long-delayed parliamentary elections -- a move that benefited Keita's party, but triggered protests.

ECOWAS had recommended appointing new judges to the court, and holding new elections in the 30 disputed parliamentary seats.

The MPs occupying those seats, however, have refused to step down. They are drawn from both Keita's party and from opposition parties.