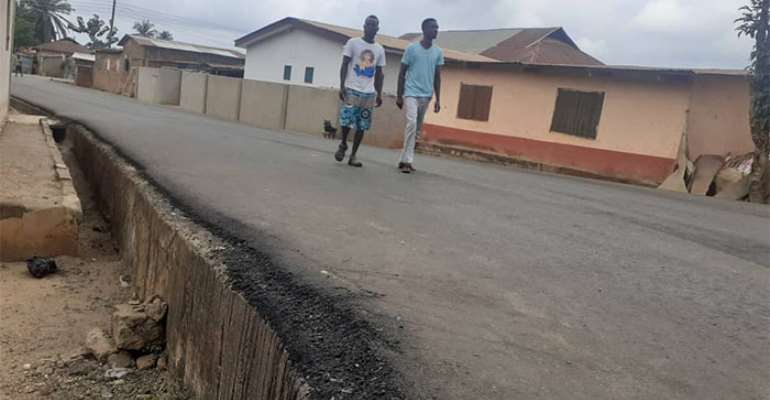 The Chiefs and People of Gbi Traditional Area (Hohoe) have heeped praises on President Nana Akufo-Addo describing him as a “promise keeper.”

According to them, they have been recipients of many promises from successive government regarding the development of their traditional area, yet fulfillment of those promises have always eluded them.

However, for the first time in a long time, they are witnessing unprecedented development in their area as promised by the President.

They have therefore held a press conference in Hohoe to express their gratitude to President Akufo-Addo and urge him on to do more for them.

Addressing the press conference on Tuesday, August 11, 2020, Togbe Adzimah V narrated that the President in February 2020 visited the area to commiserate with them over the ancestral journey of their Paramount Chief, Togbega Gabusu VI.

On that day, the President lamented over his inability to fix the main Hohoe Trunk road and the Hohoe township roads, he promised Togbega Gabusu when he visited him early on.

To this end, the President re-assured the Chiefs and people of Gbi and Hohoe Municipality that the roads will be fixed to honour the late Togbega Gabusu VI.

“True to his words, the main Hohoe trunk road and the township roads are currently being fixed with Asphalt, something the late Togbega Gabusu VI had always been craving till his demise.”

Togbe Adzimah V stressed that “We believe with this, his soul would forever remain grateful for this great memorial honour.”

Failed Promises by Others

Togbe Keh XII, Chief of Gbi Wegbe (Left Wing Chief) reiterated that “We have been witnesses to series of promises made, not only from here (NPP Government), but also across (Other political groups) which has never been fulfilled.”

However, “For once, if we are witnessing fulfillment of these promises. We have to acknowledge our gratitude for it,” he stressed.

Hohoe Municipality and Constituency has always been considered a central point and a commercial hub that links the Volta and Oti region. It is among the three most vibrant areas in the region and projected to be a growth pole should the Eastern Corridor road be completed.

It houses the Bank of Ghana Office and the COCOBOD office that serves Oti and Volta. It also hosts the new Volta Regional Hospital and Second Campus of the University of Health and Allied Sciences (UHAS). It is also the hometown of the Energy Minister John Peter Amewu.

However, the area had very poor roads and with only a handful being tarred. They also lacked alot of social amenities. The situation in Hohoe according to the Chiefs and community members have changed drastically since the governing New Patriotic Party (NPP) government took over three and half years ago.

This is making Hohoe the envy of many constituencies in the region, as almost all their town and community roads including bridges have been done with street lights covering many of them.

It is for this reason that the Chiefs have commended the President and the Energy Minister for their roles in ensuring the people have their share of the national cake.

Togbe Keh said the commendation is not political but a fact that needed to be acknowledged because “he who climbs a fruitful tree is worthy of support.”

Hence, they will not keep a blind eye. He said “Should we say that another side will not be happy and so we should close our mouths? We should not recognize; we should not identify what is happening? No, I don’t think it might pass the test of time.”

He added that anyone who believes that their commendation will not favour some political party or group, is not being honest because “If that should be the mentality of any other person then it is rather unfortunate.”