By Ifesinachi Okafor-Yarwood - The Conversation 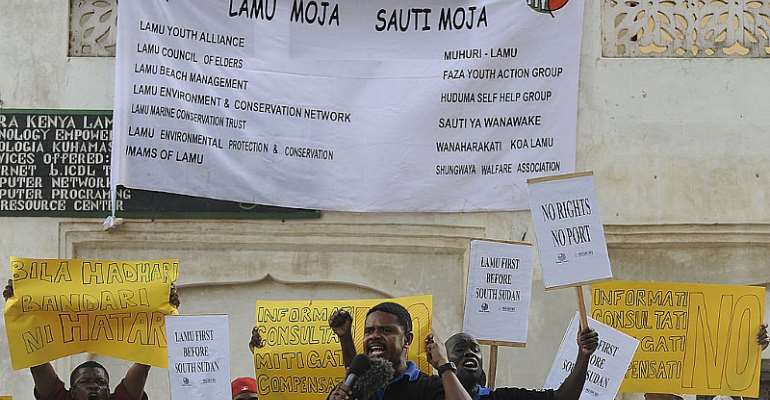 Residents of Lamu, Kenya, accuse the government of ignoring their concerns and going ahead with the construction of a huge port. - Source: TONY KARUMBA/AFP via Getty Images

Africa has 38 coastal countries and six islands whose maritime industry is estimated to be worth US$1 trillion per year. This figure will increase as they develop their offshore hydrocarbon, energy, tourism, maritime transport, shipping and fishing sectors.

These industries are collectively called the “blue economy”. They are recognised as central to Africa's sustainable development. They can also play a key role in achieving the continent's Agenda 2063 . This includes achieving integration, prosperity and peace.

But for this to happen, it's important that the benefits are equally distributed. And resources must be used in a way that's ecologically sustainable.

My colleagues and I reviewed nine case studies of blue economy projects across the continent. These included the Kribi Port project in Cameroon and the Lamu Port project in Kenya.

We were able to extract findings from both successful and unsuccessful projects.

Findings from unsuccessful projects showed that governments had the right intentions. But the emphasis was on economic outcomes. Social equity and ecological sustainability got limited attention.

We concluded that, to achieve blue economy goals , coastal states must reconsider their strategies.

We propose a collaborative framework. This would amalgamate the top-down and bottom-up approaches to blue economy management. It would entail active engagement between government, industry, other stakeholders and the local communities throughout the process – from conception to implementation.

The projects we looked at all involved investors, governments and communities . They included marine transport and shipping, port infrastructure, fisheries and aquaculture, marine phosphate mining and marine protection.

The nine projects we looked at affected 11 countries. These were Cameroon, Côte d'Ivoire, Kenya, Namibia, The Gambia, Madagascar, Seychelles, Tunisia, Egypt, Algeria and Morocco. Three of the case studies were from Kenya, while one cut across five countries.

Drawing on our case studies we found that successful initiatives accentuated the involvement of local communities and promoted sustenance of natural ecosystems. They successfully balanced ecological, social and economic features.

This happened through the active engagement of the government, and other stakeholders, with local communities. Examples included seaweed farming in Kenya and the community of fishers project in Madagascar. Another was the community-led mangrove conservation and restoration project – “Mikoko Pamoja” – in Kenya.

Unsuccessful projects were likely to exclude local communities in the process and undermined their livelihoods. They also tended to prioritise economic gains at the expense of the environment.

These projects included the development of port infrastructure and marine phosphate mining.

Projects in Cameroon, Côte d'Ivoire, Kenya and Namibia all showed that key ecological and social cultural criteria were missing. This happened even after the government engaged local communities at the start. But they didn't follow through on some of their promises.

Another factor was that governments focused solely on developing their economies, forgoing the negative impact on the ecology and people.

Negative consequences like these can lead to instability or secessionist movements. Examples include Nigeria's Niger Delta and Angola's Cabinda .

Achieving the goal of successful blue growth in Africa requires strong political commitment. This is vital to balance economic, social and environmental benefits.

We propose the adoption of a collaborative framework involving various stakeholders. These would include government, international corporations, scientific communities, NGOs and local communities. They would work collectively throughout the process, from inception to completion.

They would need to consider a range of criteria, including:

All parties must be actively engaged throughout. By being involved, from the beginning to the end, communities can solve issues that arise along the way.

Seeing communities as equal partners also means that fears – for instance about timing or compensation – are allayed. And grievances about livelihoods or ecological concerns would be identified early on and addressed.

As coastal states look to make gains, they must aim for economic development, local community inclusion and environmental sustainability. One aspect can't be prioritised over the other. Without this they risk perpetuating a cycle of instability. This could be social, economic or political.

Ifesinachi Okafor-Yarwood does not work for, consult, own shares in or receive funding from any company or organization that would benefit from this article, and has disclosed no relevant affiliations beyond their academic appointment.